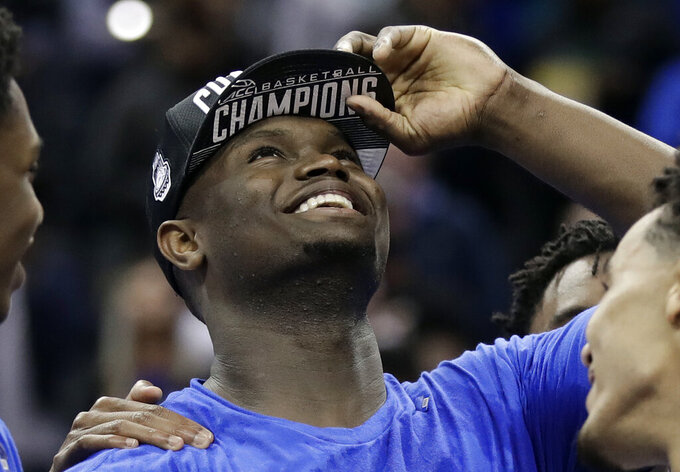 It's going to take more than a busted sneaker to stop Zion Williamson.

The way he's going, he might not be done until he's cutting down nets at the Final Four.

Impressed by how Duke is playing with college basketball's best player in the lineup, the NCAA selection committee made the Blue Devils the overall top seed for March Madness, perfectly in step with the oddsmakers, who had already established Duke as the 9-4 favorite to take it all.

The other 67 teams in the NCAA Tournament now have three weeks to figure out how to slow the 6-foot-7, 285-pound freshman who, many times this season, has appeared unstoppable.

"I think there's a verve when he's in there," Duke associate head coach Jon Scheyer said. "I think it's both ends. He's a guy who eliminates easy baskets and he can get you some easy baskets."

Williamson led the Blue Devils to the Atlantic Coast Conference title and ended any doubt about his health, or his willingness to finish his season playing college ball before heading to the NBA. His status had been shaky since the Feb. 20 blowout of his Nike sent him tumbling to the ground, writhing in pain with a Grade 1 knee sprain.

Some said he'd be a fool to play another minute of college ball, given the millions awaiting him in the NBA, where he's expected to be the first pick in the draft later this year.

But even in the billion-dollar business that is March Madness, there are some things money just can't buy, and Williamson wants to savor every bit of this fleeting college career, whether it lasts one more game or six.

Of Duke's five losses this season, only two have come with Williamson in the lineup, but one of those came when another potential lottery pick, Cam Reddish, was out sick and top defender Tre Jones hurt his shoulder.

"When you get two guys hurt and injured, there is no game plan anymore," coach Mike Krzyzewski said after that single loss at full strength.

The Gonzaga Bulldogs were the team to do it. The 89-87 victory came in the final of the Maui Classic in November. At that time, nobody had a grasp on how monumental the accomplishment really was.

Gonzaga earned the No. 1 seed in the West; the Zags would meet Duke in the national semifinals if both teams make it to the Final Four. North Carolina and Virginia were the top seeds in the Midwest and South, and would meet on that side of the bracket if they make it.

But there's plenty of drama to play out between now and then. Not all of it will involve Duke.

Could it come from Wofford, the seventh seed in the Midwest that will be viewed as an underdog even though it brings in a 20-game winning streak and stands at No. 13 in the new NET rankings that the selection committee used to build the bracket?

Or possibly from 14th-seeded Old Dominion, whose coach, Jeff Jones, buried his face in a towel as the Monarchs were wrapping up their title in the Conference USA tournament Saturday, then spoke of his battle with prostate cancer?

Or what about LSU — now, that would be awkward. The Tigers won the SEC regular-season title, but have since had their coach banished after details emerged about him talking to a recruiting middleman about a "strong ass offer" he made to a high schooler. If true, coach Will Wade clearly violated NCAA rules — in fact, The NCAA Rule: Thou Shalt Not Pay Players.

But while Wade may not be coaching, the Tigers will be at the party — seeded third in the East, with a first-round matchup against Yale awaiting.

Of course, LSU isn't the only school that has come under a cloud of suspicion and controversy in the wake of an FBI investigation that led to the not-so-groundbreaking conclusion that shoe companies have an outsized, unhealthy influence on the college game.

And yet, for all those headlines, the biggest shoe-related news in college hoops this season had to do with Williamson's blown-out size 15.

Even that couldn't take the big man down for too long. Now, the search is on — a search for some team that can keep him from leaving the college game with nets dangling around his shoulders.