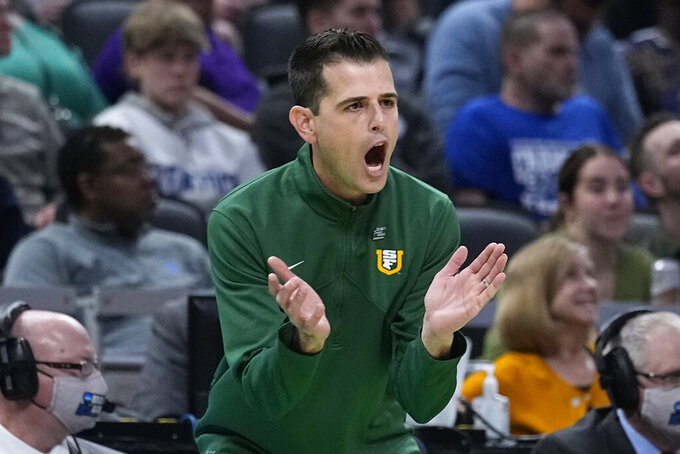 FILE - Then-San Francisco head coach Todd Golden applauds his team during the first half of a college basketball game against Murray State in the first round of the NCAA tournament, Thursday, March 17, 2022, in Indianapolis. New Florida coach Todd Golden doesn’t have a rebuild on his hands. It’s more like a puzzle. (AP Photo/Darron Cummings, File)

GAINESVILLE, Fla. (AP) — New Florida coach Todd Golden doesn’t have a rebuild on his hands. It’s more like a puzzle.

Golden, who replaced Mike White in March after three years at San Francisco, feels like he has all the pieces in place to be competitive in his first season in Gainesville. It’s just trying find out how to fit them together.

It could take time. But Golden is thinking weeks, maybe months — not years.

He believes he has enough talent and experience to get the Gators back to the NCAA Tournament after a one-year absence and potentially make them a legitimate contender in the Southeastern Conference, something White failed to do with any regularity during his seven-year tenure.

“This team has the makings of an NCAA Tournament team, so that will be a simple barometer that we can use once we get to March to see if we’ve had a successful season or not,” Golden said.

Florida made the tournament four times under White but failed to get past the opening weekend in three of those. White's defense-first approach left players and fans wanting more — and created an opportunity for Golden to change the narrative quickly at a program longing to recapture its glory days that weren’t that long ago.

It should help that Golden is starting out with one of the best big men in the league, maybe even the country, and a dynamic point guard. Forward Colin Castleton, a first-team preseason All-SEC selection, is back after missing part of last season with a separated left shoulder.

Castleton is one of three fifth-year seniors on Golden's roster, joining shooting guard Myreon Jones and point guard Kyle Lofton. Jones, a former Penn State transfer, is looking for better results in his second season with the Gators. Lofton is a graduate transfer from St. Bonaventure who averaged 12.8 points and 5.9 assists in 2021-22.

“We’ve got to figure out which guys play best with each other,” Golden said. “We obviously have a lot of talent on the wing so we have to sort out some stuff there. But the good thing is all these guys bring different things to the table. I think they’re all different strengths. If we, as a coaching staff, can manipulate that well, we’ll be in good shape.”

Jitoboh expects to have his vision fully restored following one more procedure. The 6-foot-11, 300-pound center lost sight in one eye for eight months after Tennessee’s Uros Plavsic accidentally poked him with a finger during a game in late January. Jitoboh sustained retina damage and a detached muscle, which controlled horizontal eye movement. He already has undergone four surgeries and had to be face down roughly 20 hours a day for three months.

Castleton averaged 16.2 points, nine rebounds and more than two blocks a game before injuring his shoulder in practice in January. He blocked eight shots in his last game before the injury and just 18 over the final 12 games after he returned.

Rehabbing the injury probably prevented him from turning pro and led him back to Florida, where he’s developed a long-range shot that should make him even tougher to defend.

“Offensively, he can’t be stopped,” teammate Bonham said. “He can get to wherever he wants. And, offensively, now he’s got a 3 to his game, so he’s going to be a problem this year for sure.”