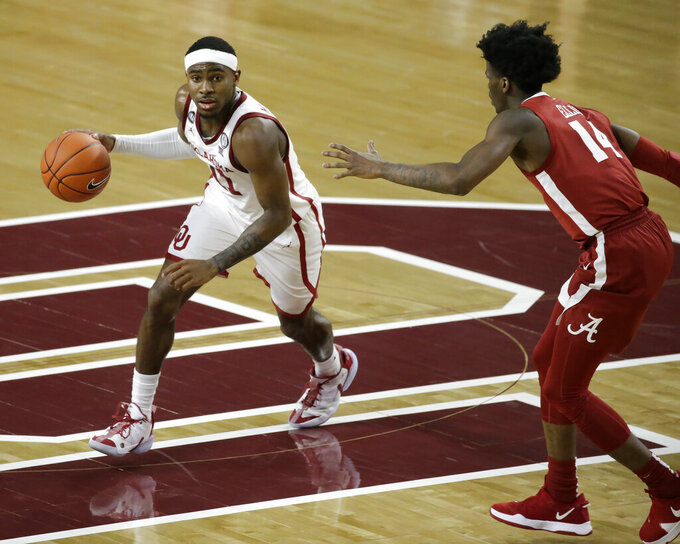 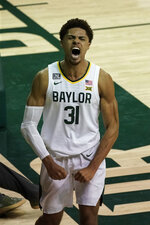 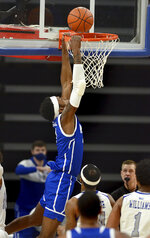 Baylor has overshadowed nearly everything in the Big 12 this season as it tries to complete an undefeated season.

Oklahoma has been making a statement of its own.

With a win over then-No. 9 Alabama on Saturday, the Sooners became just the second team in 25 years to beat three straight top-10 opponents. Oklahoma also is the first team since 1974 to beat four top-10 teams in the same month.

The Sooners’ run led to a big jump in this week’s Associated Press men’s basketball poll. Oklahoma moved up 15 spots to No. 9 in the Top 25 released Monday, its highest ranking since reaching No. 4 in 2017-18.

“Any time you can win a game like that is big from a resume standpoint, big from a confidence standpoint, momentum,” Oklahoma coach Lon Kruger said after the 66-61 win over the Crimson Tide. “It’s continuing to move in the right direction. Those wins, you never take those for granted.”

Oklahoma had to replace leading scorer and rebounder Kristian Doolittle this season and was picked to finish sixth in the Big 12 preseason poll.

The Sooners got off to shaky Big 12 start, opening 2-3 after losses to Baylor and Kansas.

The Sooners, who beat No. 17 West Virginia earlier this month, knocked off the Crimson Tide despite playing without Austin Reaves and starting guard Alondes Williams due to COVID-19 protocols.

“I thought these guys (Oklahoma), they play hard to begin with and then when they’re down two starters, they really bought in,” Alabama coach Nate Oats said.

Gonzaga and Baylor remained atop the poll for the 11th straight week.

Villanova and Michigan remained at Nos. 3 and 4, with Houston rounding out the top five. The Cougars have their highest ranking since the Phi Slama Jama team reached No. 2 in 1983-84.

Drake won 24 games in its first season under coach Darian DeVries and had 20 last year before the pandemic canceled everyone's season.

The Bulldogs have taken the next step this year, rolling through an undefeated season.

The Bulldogs (16-0, 7-0 Missouri Valley through Sunday) rallied from an 11-point deficit to beat Illinois State 78-76 in overtime over the weekend and are off to their best start in 13 years.

Oklahoma had the biggest jump by far in this week’s poll, but No. 7 Ohio State also cracked the top 10 by moving up six spots. The Buckeyes beat Penn State and crushed Michigan State last week.

No. 11 Tennessee climbed seven places after beating Kansas by 19. No. 12 Illinois also moved up seven spots following a five-point win over Iowa, which dropped three spots to No. 8.

No. 17 West Virginia dropped six spots after a home loss to Florida and a one-point win over No. 13 Texas Tech. ... No. 14 Virginia also fell six spots following a 14-point loss at Virginia Tech, as did No. 18 Missouri after losing to Auburn last week. ... No. 19 Wisconsin dropped five spots after being blown out by Michigan.

Florida moved into the poll for the first time this season at No. 22 following its win over West Virginia. ... No. 24 Purdue also made its season debut this week with win over Minnesota. The Gophers dropped out from No. 21. ... Saint Louis fell out from No. 22 after a loss to Dayton and Louisville is out from No. 25 after losing to Clemson.