Gonzaga completes season-long run at No. 1 in AP Top 25 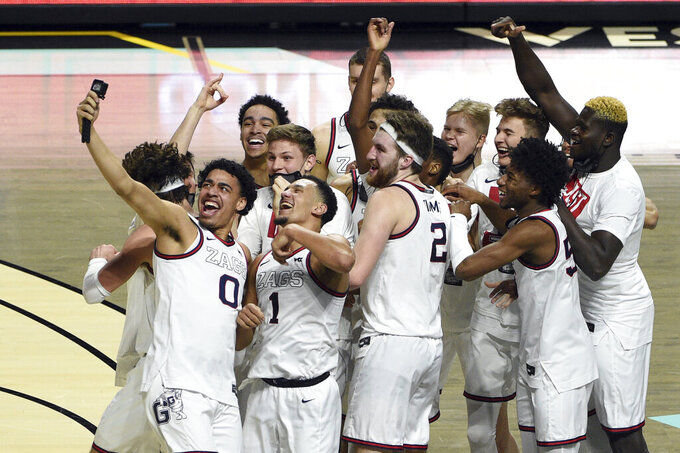 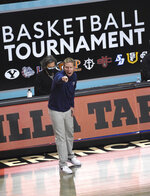 Gonzaga opened the season at No. 1. The Bulldogs never let go of that ranking.

Now, after a start-to-finish run atop The Associated Press men’s college basketball poll, coach Mark Few’s Bulldogs are focused on trying to become the first unbeaten national champion in more than four decades.

The Bulldogs (26-0) received all 60 first-place votes to stay atop Monday’s final poll, becoming the first team since Kentucky in 2014-15 to be No. 1 in every poll and the 14th overall. Gonzaga, named the No. 1 overall seed in the NCAA Tournament on Sunday, will try to become the first unbeaten national champion since Indiana in 1976.

“This whole season has been a challenge,” freshman Jalen Suggs said after the Bulldogs won the West Coast Conference Tournament last week. “But every single one of us on the roster and on the coaching staff have answered to it.”

Seven of the teams that went wire-to-wire at No. 1 ended up winning the national championship, most recently when Duke claimed a second straight title in 1992. Two of the last three — UNLV in 1990-91 and the 2015 Kentucky team — carried unbeaten records into the NCAA Tournament but lost in the Final Four.

Suggs said it was hard not to think about the potential history ahead, saying: “At some point, you've kind of got to acknowledge how special of a thing and special of a ride that we're on right now.”

Gonzaga won every game but one by double-figure margins, the outlier being an 87-82 victory over West Virginia in December. But the Bulldogs had to rally from 12 down at halftime to beat BYU in the WCC Tournament final.

Illinois jumped to No. 2 after winning the Big Ten Tournament, swapping spots with Baylor — which fell one spot after spending 15 of 17 polls sitting in second place. Michigan was next at No. 4, with all three of those teams joining Gonzaga in earning No. 1 seeds for the NCAA Tournament.

The NCAA selection committee had Baylor as its overall No. 2 seed and Illinois at No. 3.

Alabama was No. 5, with the Crimson Tide reaching their highest ranking since December 2006 after winning the Southeastern Conference Tournament for the first time since 1991. Houston, Ohio State, Iowa, Texas and Arkansas rounded out the top 10.

Shaka Smart's Longhorns had the biggest jump in the final poll, rising four spots from No. 13 after winning the program's first Big 12 Tournament title.

Villanova took the biggest tumble, falling four spots to No. 18 after an upset loss to Georgetown in the Big East Tournament quarterfinals.

In all, nine teams fell from last week. That included No. 25 Virginia Tech, which dropped three spots to remain in the rankings yet earned a No. 10 seed in the NCAA Tournament's South Region.

Gonzaga, Michigan and No. 20 Purdue remained in their slots from last week.

BYU was the only addition to the poll, tying for No. 23 with Southern California after pushing Gonzaga in the WCC Tournament finale. The Cougars replaced Oklahoma, which fell out from No. 25 after spending three weeks in the top 10 in February.

The Big 12 had a national-best six teams in the poll, with No. 11 Oklahoma State, No. 12 Kansas, No. 13 West Virginia and No. 21 Texas Tech joining Baylor and Texas. The Big Ten was next with five teams, followed by the Atlantic Coast Conference with three (No. 14 Florida State, No. 15 Virginia and Virginia Tech).