Gophers to send off inspiring seniors McBrayer and Murphy 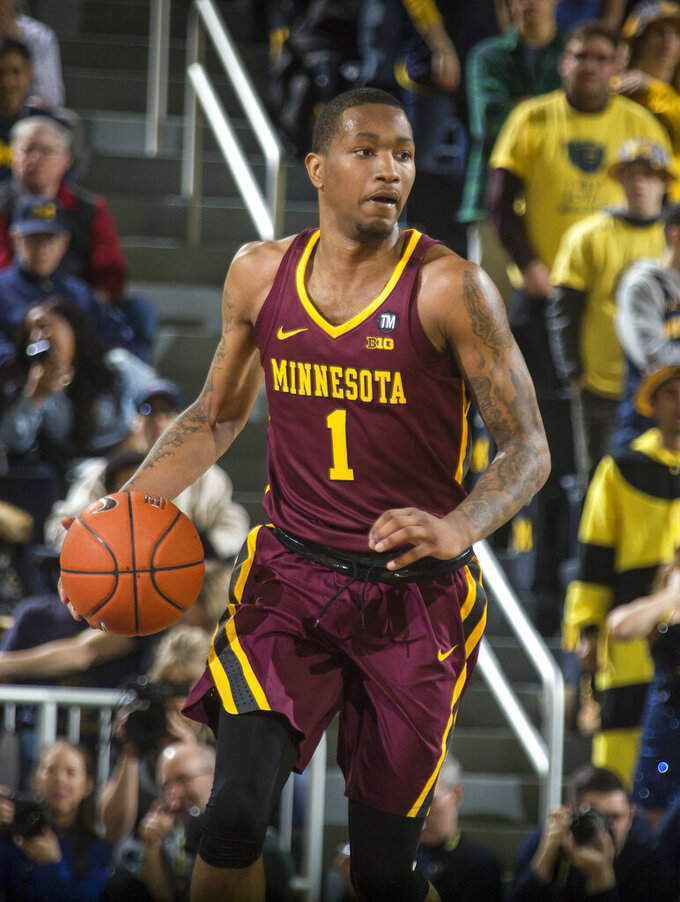 FILE - In this Jan. 22, 2019, file photo, Minnesota guard Dupree McBrayer (1) dribbles the ball in the first half of an NCAA college basketball game against Michigan, in Ann Arbor, Mich. Jordan Murphy has had to slog through a couple of rough seasons at Minnesota to become the Big Ten's second-leading rebounder of all time. Dupree McBrayer is still hurting from his mother's death a little more than three months ago. The seniors still have a chance to end their career with the Gophers on a brighter note. (AP Photo/Tony Ding, File)

When his mother, Tayra McFarlane, retired from her job as an assistant warden at a notorious New York City jail , her decision was driven by desire to attend as many of her son's games as possible during his senior year. Cancer dashed that hope, quickly and cruelly. She died on Dec. 3.

McBrayer will be introduced on the court before the Gophers play Purdue on Tuesday night, the final scheduled home game for him and four others set to depart the university, and McFarlane's absence will be felt again by everyone connected to and in support of the program.

"I have my aunt, my uncle, my brother, my cousin, a couple of my friends," McBrayer said. "I'll get emotional, probably, when I'm out there, but everything will be trying to get the win for our team."

The last Big Ten game for McBrayer and his close friend Jordan Murphy on that uniquely raised floor at Williams Arena has arrived, in the form of this critical matchup with the 11th-ranked Boilermakers. Most current NCAA Tournament projections have the Gophers (18-11, 8-10) in the field, but that doesn't mean they can lose out and assume they'll still get in. Beating Purdue would go a long way toward securing one of the 68 spots.

"I would say this team likes pressure," McBrayer said Monday afternoon. "To have a top 15 team come into your building, what more could you want?"

The Gophers will also honor Matz Stockman and Brock Stull, transfers who have averaged fewer than 10 minutes per game in their only season with the Gophers, and Jarvis Johnson, an acclaimed hometown recruit whose career was halted by a heart condition before he ever stepped on the court.

McBrayer and Murphy, though, will be the featured attractions.

The 6-foot-5 shooting guard from Queens, where he grew up with his single, no-nonsense mother, McBrayer was at his best as a sophomore. He averaged 11.1 points and shooting 41.6 percent from 3-point range to help guide the Gophers to their only NCAA Tournament under coach Richard Pitino. Last season, McBrayer was dogged by a stress reaction in the shin bone in his right leg that essentially prevented him from taking part in practice over the last two months. He still managed to appear in 27 games, often referencing McFarlane's life lessons about using toughness to go through trials.

This year, though fully healthy, McBrayer's jumper has often deserted him. He has scored in double digits only once in the last 13 games. Then, of course, there's the added burden of mourning the loss of his mother.

"He never once made it about himself. He always made it about playing for her, and he knows that she's watching. That's a unique, special perspective, so I think that he gives everybody just a lot of strength through what he's going through and the way he's been able to handle it with such class," said Pitino, who spoke fondly of his relationship with McFarlane that began with a late-night meal of lasagna in honor of his Italian heritage at their small home in the New York borough.

As throwback of a power forward as there is in college basketball, Murphy has become the second-leading rebounder in Big Ten history and moved within realistic range of finishing in the top three on the program's all-time scoring list. Generously listed at 6-foot-7, Murphy's relentlessness on the court has been an inspiration to his team the way McBrayer's resiliency has off it.

"I can't say necessarily it's been everything that I expected because of all the wrenches that have been thrown in there," Murphy said, adding: "But I don't think you could've written a better story. I think that we've overcome a lot."