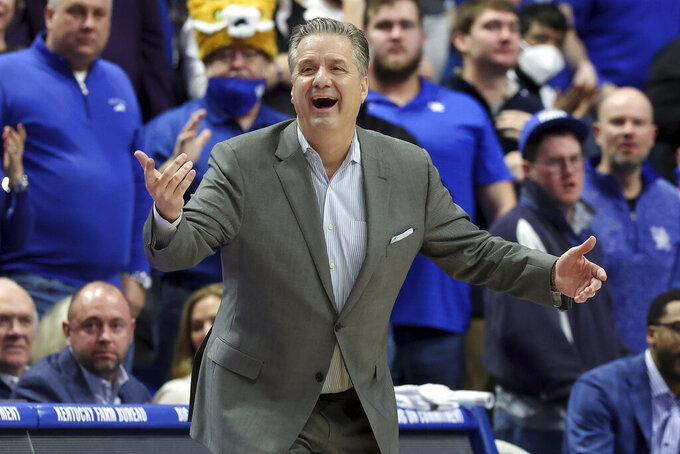 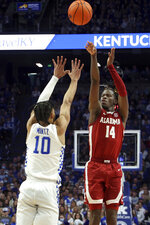 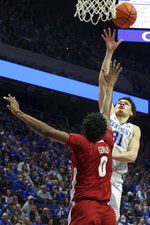 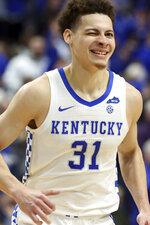 LEXINGTON, Ky. (AP) — Knowing his team would have to do more with less meant Kellan Grady needed to take his offense up a notch, at the very least.

That urgency resulted in a career day for the Kentucky guard, with his perimeter shooting providing a big spark for the No. 4 Wildcats.

Grady made seven 3s for a season-high 25 points, Oscar Tshiebwe added 21 points with 14 rebounds and Kentucky rallied twice to top No. 25 Alabama 90-81 on Saturday.

Short-handed because of injuries to starting guards TyTy Washington Jr. and Sahvir Wheeler, the Wildcats (22-5, 11-3 Southeastern Conference) trailed 46-34 with 3½ minutes remaining before halftime before closing with 13 straight points for their first lead.

Grady’s 3-pointer provided the go-ahead points that drew a thunderous roar before 20,374 in Rupp Arena.

Grady's trio of 3s in that surge were critical, not to mention another deep ball later that maintained Kentucky's edge.

“I tried not to think about my opportunity to get 20,” said Grady, who made 7 of 9 from long range and 9 of 16 overall. “Naturally, this was a chance to get more opportunities. I know what I am. My goal was to get ball across the court and get the five of us to play.”

Consecutive 3s by Jaden Shackelford and Keon Ellis, who had a career-high 28 points, sparked a rebound that eventually got the Crimson Tide within 80-73 with 4:53 left. Grady just sank another 3 and Davion Mintz added a jumper for a double-digit cushion.

Keion Brooks Jr. leaped high for a huge putback dunk with 57 seconds left to finish with 18 points and seal the outcome as Kentucky regrouped from Tuesday night's 76-63 loss at No. 16 Tennessee.

And every contribution mattered in a game the Wildcats sorely needed to stay within sight of first-place Auburn, which lost 63-62 to Florida.

Tshiebwe was 9 of 13 from the field as the Wildcats shot 53% to seize a game of runs. Brooks had eight rebounds, while Jacob Toppin added 13 points and six boards. The Wildcats scored 14 points off turnovers, in addition to controlling other phases including rebounding (39-32), paint points (36-24) and second-chance points (22-15).

“I shut down practice and we had 36 hours to figure out who is going to play, how am I going to use timeouts. ... The whole locker room happy was happy. Sahvir and TyTy thanked the team.”

Shackelford had 18 points and Noah Gurley 12 for the Crimson Tide, who had won their past three. They seemed in control for the first 16 minutes before letting the lead slip away. Alabama recovered for a stretch after halftime to lead again before Kentucky snatched it away for good.

“We kept telling them through the hot start, our defense wasn’t going to be good enough to win the game,” coach Nate Oats said. “That’s what ended up happening.”

Alabama jumped on the depleted Wildcats with red-hot shooting from deep before going cold late in the first half to fall behind. The Crimson Tide briefly found their stroke to lead in the second and attempt a rally, but their reliance on the long ball ultimately cost them a chance for a big win.

Kentucky: Missing Washington and Wheeler put the Wildcats at a disadvantage on both ends of the floor. Grady kept them in it before he got hot in the second half, and others chipped in a way few could have imagined.