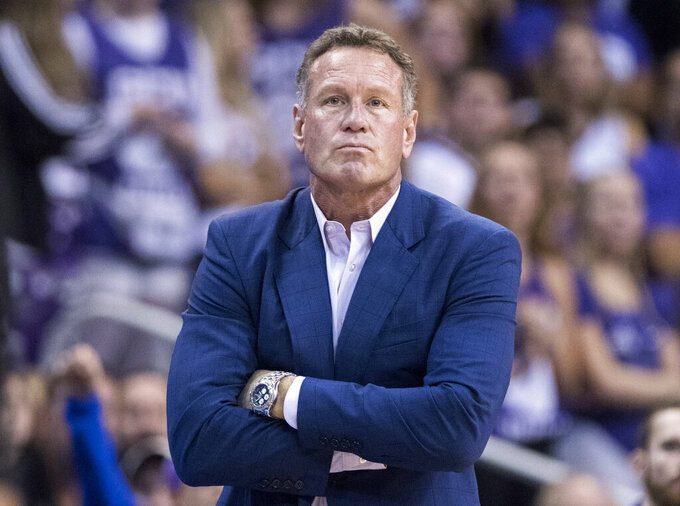 FILE - In this Dec. 9. 2018, file photo, Grand Canyon coach Dan Majerle watches his team play Nevada during the first half of an NCAA college basketball game in Phoenix. Grand Canyon has fired Majerle after seven seasons. The school announced the former Phoenix Suns star's firing Thursday, March 12, 2020, hours after the Western Athletic Conference and NCAA tournament were canceled due to concerns over the coronavirus. (AP Photo/Darryl Webb, File)

The school announced the former Phoenix Suns star's firing Thursday, hours after the Western Athletic Conference and NCAA Tournament were canceled due to concerns over the coronavirus.

Marjele was hired in 2013 to help usher the Antelopes through its transition into Division I. Grand Canyon won at least 20 games its first two years in Division I, but went 13-17 this season.

"We have made the decision to move in a new direction with our men's basketball program." GCU President Brian Mueller said in a statement. “We wish Coach Majerle the best of luck in his future endeavors.”

Majerle was one of the most popular players during his time with Arizona and was hired at Grand Canyon on former Suns owner Jerry Colangelo’s recommendation.

The Antelopes appeared to be one track for having a successful start to their Division I era, but missed out on the NCAA Tournament the first two years by losing to New Mexico State in the WAC tournament title game.

Grand Canyon took a hit this season when TCU transfer Jaylen Fisher was declared ineligible and senior forward Oscar Frayer was academically ineligible. The Antelopes finished 8-8 in the WAC and were scheduled to played Missouri-Kansas City in Las Vegas on Thursday before the WAC tournament was canceled.

"GCU has become a premier mid-major basketball destination with its resources, facilities, and student and community support," Colangelo said. “We look forward to the future of the program under the direction of the new head coach.”

Menzies was hired at GCU after spending nine seasons at New Mexico State and three at UNLV.