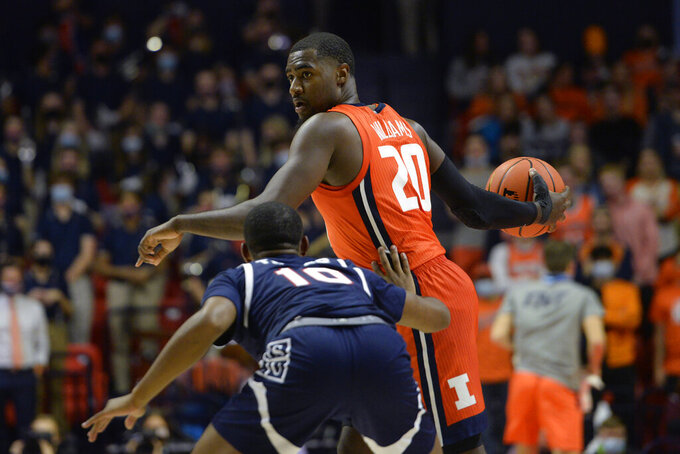 Illinois' Da'Monte Williams (20) holds the ball away from Jackson State's Dyllan Taylor during the first half of an NCAA college basketball game Tuesday, Nov. 9, 2021, in Champaign, Ill. (AP Photo/Michael Allio)

Grandison and Da’Monte Williams, both fifth-year seniors, were the only returning starters on the floor, but the Illini didn’t look out of sync.

Sophomore Coleman Hawkins had a career-high 13 points and eight rebounds for the Illini.

“I knew we had a lot of scorers out, but my mentality wasn’t even to come in and score at all,” Grandison said. “It was to know my assignment on defense first, knowing the scouting report. I got in foul trouble early and I didn’t let that affect me.

“And I was just hooping.”

He drilled a 3 to put the Illini up 21-2 midway through the first half off a Tigers mishap, one of 14 first-half turnovers that led to 13 points for Illinois.

“My expectation for Coleman is probably a lot higher than his is,” Illinois coach Brad Underwood said. “He has no idea how good he’s going to be.”

Underwood also praised the versatility of Grandison, who finished 7 of 10 from the floor, including 2 of 4 from 3-point range.

“Jake took over in a stretch, and you see what he’s added to his game with his off-the-bounce game,” Underwood said.

Illinois showcased its depth while missing three likely starters in Cockburn, Curbelo and Frazier. Strong performances from Grandison and Hawkins bode well for a frontcourt that is unproven beyond Cockburn. The Illini held a 45-35 edge in rebounds while limiting the Tigers to 37.3% shooting.