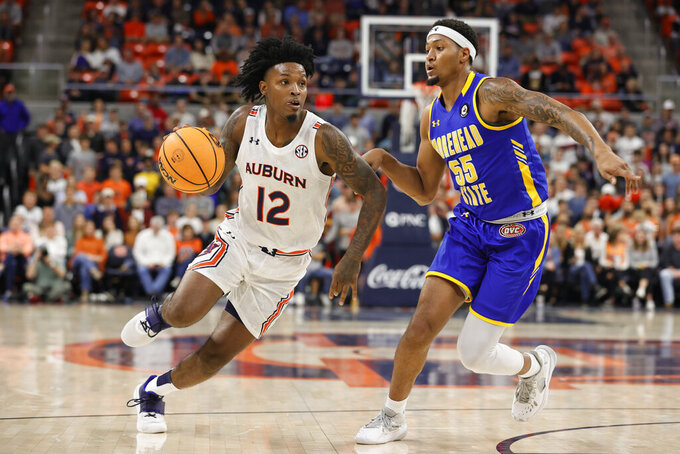 Auburn guard Zep Jasper (12) drives to the basket around Morehead State guard Ta'lon Cooper (55) during the first half of an NCAA college basketball game Tuesday, Nov. 9, 2021, in Auburn, Ala. (AP Photo/Butch Dill)

“I was pleased with the effort and the energy,” Pearl said, adding that the Tigers' "defensive effort was really, really special.”

Defense set the tone for Auburn, as Morehead State didn’t score until the 14:39 mark of the first half and didn’t get out of single digits until there was 4:30 left before halftime. The Tigers forced 17 turnovers from the visiting Eagles.

After needing to rally to beat Division II Southern Indiana in an exhibition last week, Pearl said he considered changing his starting lineup from the preseason. Auburn’s coaching staff couldn’t come to a consensus, and Pearl kept the same five for the opener. The Tigers responded by opening the game on a 35-6 run.

“Obviously, I threatened (the players) with their jobs,” Pearl said. “And sometimes, when your job is threatened, you respond or you get replaced. And they responded very well.”

TURNING DOWN THE TURNOVERS

In addition to his trio of deep 3-pointers and five rebounds, Green didn’t commit a turnover from the point guard position in Pearl’s up-tempo offense.

“I think I played pretty well,” Green said. “I just wish some of my shots in the second half would have fallen.”

WELCOME BACK TO THE JUNGLE

Like many teams across college basketball, Tuesday night marked the first time Auburn was able to play in front of a full-capacity crowd in more than a year. The Tigers’ student section, “The Jungle,” was completely full an hour before tipoff — and the players fed off their energy throughout the night.

“It was electric,” Kessler said. “Last season with COVID and not having as many fans out there, all the fans wanted to be out there tonight. And they were unbelievable.”

Morehead State: The Eagles trailed by as many as 29 points in the first half, but still found ways to score efficiently on a tough SEC defense in the second half. The key for Preston Spradlin’s offense will be ball security, as it ranked toward the bottom of Division I in turnover percentage a season ago.

Auburn: Pearl cautioned fans about a possible slow start, but his revamped lineup showcased both relentless defense and impressive offensive balance early against a team that made the NCAA Tournament last season. But the Tigers’ half-court offense cooled off in a big way after halftime, suggesting it will take more time for Auburn to develop consistency.

Morehead State will play another road game in Alabama on Friday, when it visits UAB.