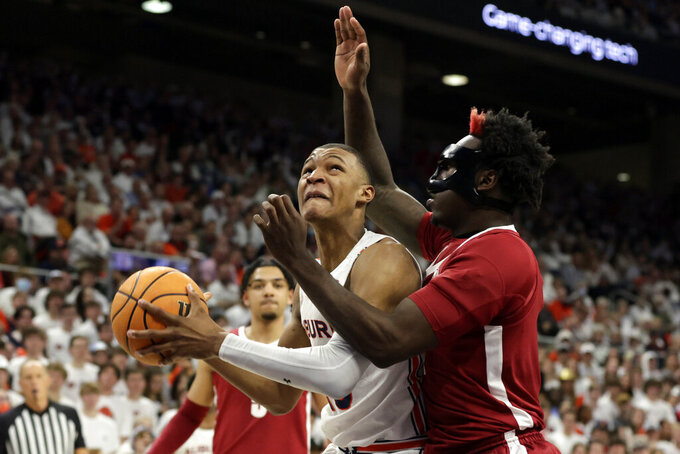 Auburn forward Jabari Smith looks for a shot as Alabama forward Juwan Gary, right, defends during the second half of an NCAA college basketball game Tuesday, Feb. 1, 2022, in Auburn, Ala. (AP Photo/Butch Dill)

AUBURN, Ala. (AP) — Wendell Green Jr. scored a season-high 23 points off the bench as No. 1 Auburn cruised past rival Alabama with a 100-81 home win Tuesday night.

Green led the Tigers in scoring while also recording eight rebounds and six assists with only one turnover. Jabari Smith added 17 points as Auburn (21-1, 9-0 Southeastern Conference) extended the nation’s longest winning streak to 18.

“I had a rough past two games, and I knew this was a big one,” said Green, who scored a combined eight points in his last two outings. “So, I just wanted to come out here for my teammates and show them I could do what I do. They kept telling me all weekend to just get back to myself.”

After foul trouble limited him to only 12 minutes in Auburn’s first meeting with Alabama last month, Walker Kessler made his presence felt in the rematch with 14 points, 12 rebounds, eight blocks and four steals.

“I wanted this one, because I felt like, last game, I didn’t get the opportunity I wanted to against Alabama,” Kessler said. “I was pumped for this game. I was amped, and I was happy the refs let me play.”

Auburn led by as many as 19 in the first half, but Alabama answered back with three straight 3-pointers to gain momentum heading into halftime. The Crimson Tide then opened the second half with a 18-6 run to cut the Tigers’ lead to two.

The Tigers hit five of their next six shots to reestablish a double-digit lead, which they would not relinquish the rest of the way.

“Obviously, Shackelford and Quinerly are special players and extremely, extremely, extremely talented — a handful,” Auburn head coach Bruce Pearl said. “But I think it’s the sum of our parts once again. Alabama made a nice run to start the second half. Our bench came in and got several stops.”

THE DIFFERENCE DOWN LOW

After shooting 78.6% on 2-pointers in an upset over Baylor on Saturday, Alabama went 11-for-33 (33.3%) inside the arc against Auburn. The Tigers finished with 52 points in the paint, while Alabama only had 22. Auburn also had 27 fast-break points, with most of them coming on layups and dunks.

“They were better than we were tonight,” Alabama head coach Nate Oats said. “They really don’t have any weak links, and their frontcourt overwhelmed us. ... We had too many possessions when we didn’t sprint back on defense and gave them easy buckets in transition.”

Auburn scored 100 points on Alabama for only the third time in 166 meetings. The Tigers hadn’t hit triple-digits against the Crimson Tide since Valentine’s Day in 1999, when they won 102-61 en route to an SEC regular-season title.

Alabama has beaten three teams currently ranked in the top 10, but several lengthy cold spells on offense limited its chances at another big win. The Crimson Tide now has a losing record in SEC play and will look to finish stronger in the second half of the league slate.

Auburn played well on both ends in the first half, scoring 51 points and holding Alabama to shoot just 32.4% in the first half. With the victory, the Tigers preserved their multi-game lead at the midway point of the SEC regular-season title race.