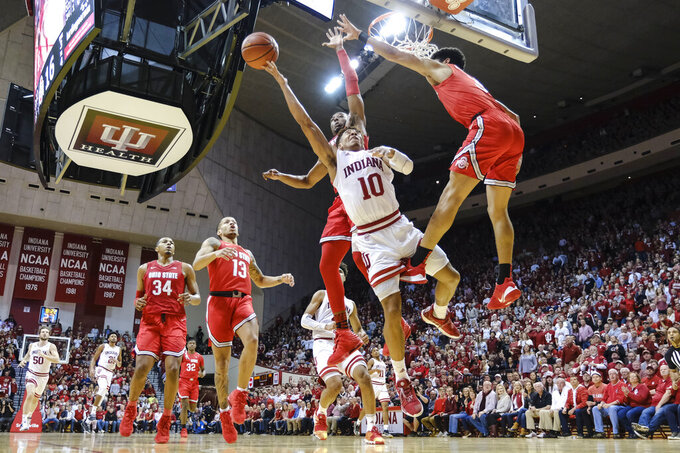 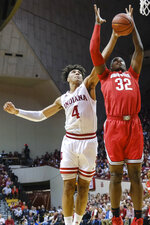 BLOOMINGTON, Ind. (AP) — Devonte Green scored 19 points Saturday and Rob Phinisee added 13 in his first start of the season to help Indiana hold off No. 11 Ohio State 66-54 and send the Buckeyes to their fourth straight loss.

But it was a mighty struggle for two teams trying to break out of offensive funks.

Indiana missed eight straight shots late in the first half to give away what had been a nine-point lead, and the Buckeyes opened the second half by missing their first shots as a 34-31 halftime lead vanished.

Yet amid all scoring droughts, all the missed free throws and the sometimes sloppy play, Indiana still found a way to scrape together a late, game-changing 12-0 run. Green's free throws gave Indiana a 53-45 lead with 7:57 to play and Ohio State never seriously challenged again, with Green continuing to score.

Phinisee gave Indiana the early jolt it needed by making his first three 3-pointers, the last one putting Indiana ahead 13-5. And when the Hoosiers extended the lead to 25-16 midway through the half, they appeared to be rolling.

Ohio State: The Buckeyes haven't topped 60 points in three weeks, finished with 16 turnovers and went just 2 of 14 from 3-point range in the second half. No wonder that 11-1 start seems like a distant memory, and if they can't get this fixed more losses could be coming.

Indiana: Coach Archie Miller promised changes after Wednesday's game and they worked. The Hoosiers played with more energy, more effort and Phinisee helped set the tempo with his quick ball movement. But if the Hoosiers don't improve at the line, where they were 20 of 36, every game will be an adventure.

Indiana: Green was 5 of 8 on 3s and had five rebounds. Phinisee had seven rebounds. Joey Brunk had seven points and five rebounds. ... Forward Damezi Anderson sat out with an illness. ... Indiana celebrated alumni reunion day by welcoming dozens of former players, managers and coaches, including former star Alan Henderson.