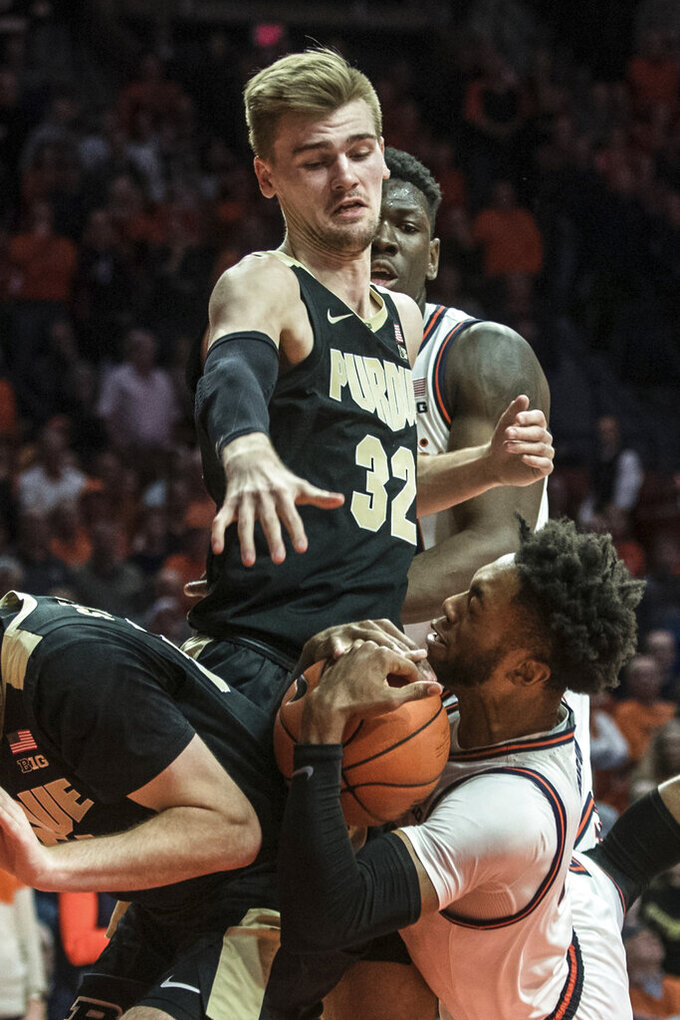 Illinois' Alan Griffin (0) holds on to the ball as he is pressured by Purdue's Matt Harms (32) in the first half of an NCAA college basketball game, Sunday, Jan. 5, 2020, in Champaign, Ill. (AP Photo/Holly Hart) 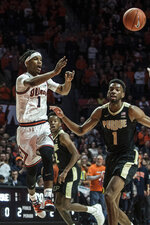 CHAMPAIGN, Ill. (AP) — Sophomore Alan Griffin has been a crowd favorite in Champaign since last season, and he continues to make a case for breaking into the Illinois starting lineup.

On Sunday night, Griffin scored 16 points and grabbed a career-high 12 rebounds and the Illini beat Purdue 63-37.

“I just try to bring positives to every game,” Griffin said. “I look to be an energy boost off the bench. And I try to do that every game, just give effort.”

His coach likes what he’s seen so far.

“His energy and motor are just phenomenal,” said Illinois coach Brad Underwood. “Alan doesn’t know any other way to play.”

Trent Frazier and Kofi Cockburn added 12 points each for the Illini.

“When you play a team with two big guys like that (7-footer Cockburn and 6-foot-9 Giorgi Bezhanishvili) who clog up the middle, it’s tough to win,” said Purdue coach Matt Painter. “Our defense wasn’t bad tonight; we just kept missing layups and shots in close.”

“I remember a couple of years ago, we held Carson (Edwards) to 40 points here,” Underwood said, referring to the former Purdue star and current Boston Celtics guard. "I’m very proud of these guys, because Purdue is one of the elite defensive teams in the country.”

Illinois was coming off a tough 76-56 loss at No. 14 Michigan State on Thursday.

“I was very proud of this team tonight,” Underwood said. “We showed the team nothing from the Michigan State game, not one clip. We just wanted them to move on, and they did.

Frazier was blunter after the game. “We stepped up and took shots tonight that we weren’t tough enough to try on the road.”

“We were very dialed in tonight,” Underwood said. “I thought our pace and tempo were outstanding.”

The Illini scored the first 11 points and took a 32-19 lead at halftime.

Cockburn scored 10 points in the opening frame, none bigger than a thunderous two-handed dunk at 11:09 that brought the crowd to its feet. Frazier also fired up the crowd with a spectacular underhand layup late in the first half after forcing a turnover at midcourt.

The Boilermakers didn’t score until 7-3 center Matt Haarms hit a free-throw at 13:09.

Griffin grabbed six offensive boards, many coming in the first half.

“One of the goals coach gives us is to see how many offensive rebounds we can get,” he said. “And everyone is invited to the party.”

Illinois needed a big home win after the loss at No. 14 Michigan State, and got it Sunday. The Illini hit on all cylinders from the opening tip.

With Purdue facing No. 12 Michigan this week, this one hurt.

Purdue: Faces an even tougher Big Ten team when it travels to No. 12 Michigan on Thursday.

Illinois: Plays at Wisconsin on Wednesday.