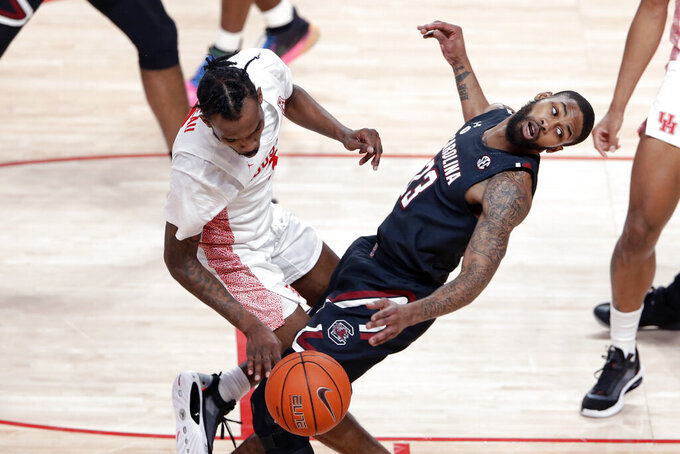 HOUSTON (AP) — Houston coach Kelvin Sampson would rather do a lot of things other than miss a game.

Sampson missed Saturday night’s game due to COVID-19 contact tracing, but the Cougars didn’t miss out on another win.

Quentin Grimes had 23 points and seven rebounds, Tramon Mark added 18 points and No. 10 Houston rallied for a 77-67 win over South Carolina.

Grimes scored 19 points in the second half, including 12 of 13 from the free throw line. Mark scored 11 points after the break, including 6 of 7 from the line.

“Our kids, they played their hearts out,” Houston's acting coach, Quannas White, said. “The first half didn’t go the way we would have liked it to go. It wasn’t Cougar basketball, but at halftime, our guys went in, listened and played Cougar basketball.”

DeJon Jarreau finished with 11 points and eight rebounds for Houston (4-0), which shot 38% and made 4 of 19 3-point attempts. Houston was helped by 31-for-38 shooting from the free throw line.

Sampson and his son, assistant coach Kellen Sampson, missed the game because of COVID-19 and contact tracing protocols. The school said the Sampsons were isolating at their homes and not showing symptoms.

Kelvin Sampson said Kellen tested positive, but he had to miss Saturday and will miss the Cougars’ next game on Wednesday due to contact tracing.

White said Kelvin Sampson's confidence in him dates to when he played for Sampson at Oklahoma.

“Experience is the best teacher,” White said. “Coach does a great job of not only preparing the players, but he prepares the staff.”

Justin Minaya scored 13 points and Jermaine Couisnard and Keyshawn Bryant added 10 points apiece for South Carolina (1-2), which shot 44%. The Gamecocks made 17 of 29 shots from the line.

“We let a great opportunity slip through our hands,” South Carolina coach Frank Martin said. “We missed a bunch of free throws and turned it over nine or 10 times in the first half or we could have had a bigger lead. … In the second half, we had a bad stretch of basketball.”

Houston used a 14-2 run early in the second half and opened up a 48-42 lead on a jumper by Mark with 14 minutes remaining. The run started after White called a timeout a minute into the second half.

“I thought it was a tremendous timeout by him,” Kelvin Sampson said. “The timing was great. I can only imagine what he said in the huddle. The kids responded. That’s a sign of great respect on both sides.”

After South Carolina closed within 50-49 on a free throw by Wildens Leveque, Houston used a 12-3 spurt and opened a 10-point lead on three free throws by Grimes with eight minutes left.

South Carolina led 35-31 at halftime behind eight points each from TJ Moss and Minaya.

South Carolina: The Gamecocks played Houston tough, but were never able to pull away from the Cougars in the first half. South Carolina had issues with turnovers, committing 19, which Houston turned into 21 points.

“We’re turning the ball over way too much,” Martin said.

Houston: The Cougars overcame a horrendous first half in which they shot 33%, including 1 of 13 on 3-pointers. At one point, they went 8½ minutes without a field goal. Houston played in the second half just as it had in its first three contests, with tough defense, earning rebounds and taking care of the ball.

Mills, who has averaged eight points in two games, missed Houston’s first game of the season against Lamar on Nov. 25 with an injury. Sasser is Houston’s leading scorer with 17.3 points per game through the first three games.