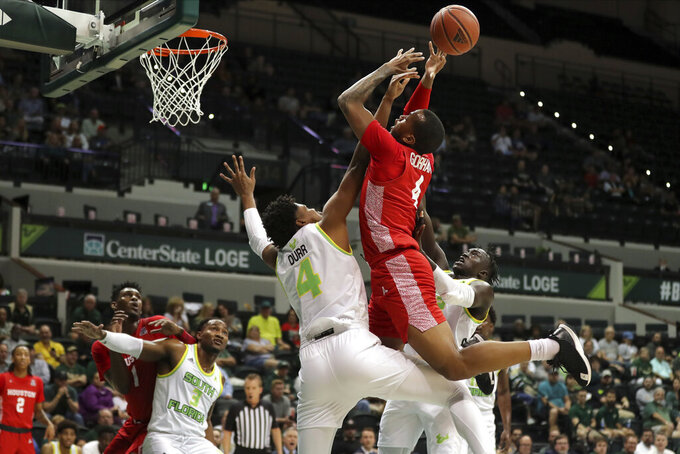 Grimes scored nine of his 22 points in the final 3:28 on Wednesday night, helping No. 20 Houston hold off South Florida 62-58 and remain alone atop the American Athletic Conference.

The sophomore guard made six straight free throws and also sank a 3-pointer that gave the first-place Cougars (20-5, 10-2) some breathing room down the stretch in the matchup between the top two defensive teams in the league.

“We're kind of who's going good and let them have it," Houston coach Kelvin Sampson said. “Grimes has had his moments. He's been kind of up and down. He played pretty good against Wichita State the other day. He's had good games, but here recently his confidence is coming along.”

Fabian White Jr. scored 10 points for Houston, which led 45-34 before USF rallied to within 53-51. Grimes put the game away with help from DeJon Jarreau, who rebounded his own miss and scored for a 58-53 lead with 21 seconds to go.

“That's our game, every night," Sampson said of Jarreau's putback, one of just two baskets he made all night. “We're not a good shooting team. We haven't been all year. I guess we're kind of used to it.”

The Cougars, coming off a 33-point blowout of Wichita State that gave them sole possession of first place in the league, outscored USF 17-2 on second-chance opportunities. They also went 11 for 12 from the foul line, including 10 for 10 after halftime.

“Our first stop defense was really good, but either they made the shot or they figured out a way to keep the ball alive and come up with an offensive rebound," Gregory added. “That's the next step for us as a team and as a program — to get to that point where you get that stop, you get that rebound, and then you go down on the other end and execute really well.”

Laquincy Rideau led USF (11-13, 4-7) with 21 points. David Collins scored 13, but missed four throws in the final minutes to hinder the bid for an upset.

The victory, combined with a 68-49 win over the Bulls at home on Jan. 26, gave Houston a sweep of the season series between the teams. USF fell to 0-30 against ranked opponents since last beating a Top 25 team in February 2012.

Houston: The Cougars have won eight of nine, with the lone setback during the stretch a two-point loss at Cincinnati on Feb. 1. They won Wednesday night without getting their usual production from Nate Hinton, who averages nearly 11 points and just over nine rebounds per game. The 6-foot-5 guard was scoreless in eight first-half minutes and actually didn’t attempt a shot until his 3-pointer put the Cougars up 43-32 with 12 minutes left. Hinton finished with 3 points on 1-for-3 shooting.

South Florida: The Bulls haven’t beaten a ranked opponent since upsetting No. 19 Louisville 58-51 on Feb. 29, 2012. Wednesday’s loss stopped a three-game winning streak they put together after losing at Houston last month.

Houston’s Kelvin Sampson moved past Alden Pasche as the third-winningest coach in school history behind Guy Lewis (592) and Pat Foster (142). He’s 136-57 in six seasons with the Cougars, whose 80 victories over the past three seasons are the fourth most in the nation behind Gonzaga, Virginia and Duke. Pasche was 135-116 from 1946-56.

Houston: At SMU on Saturday