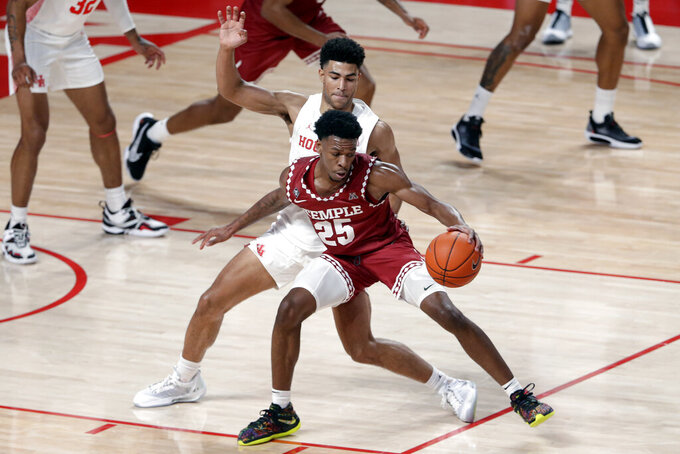 Temple guard Jeremiah Williams (25) is pressured by Houston guard Quentin Grimes, back, during the first half of an NCAA college basketball game Tuesday, Dec. 22, 2020, in Houston. (AP Photo/Michael Wyke)

Grimes had 22 points and seven rebounds, Gorham had 14 points and 12 boards, and No. 6 Houston beat Temple 76-50 on Tuesday night in the American Athletic Conference opener for both teams.

Grimes scored at least 20 points for the third straight game as the Cougars shot 48%, including 10 of 26 on 3-pointers.

Gorham had his second straight double-figure rebounding game after grabbing 16 rebounds on Sunday.

“He’s a tough kid,” Sampson said. “Obviously, he’s never rebounded at this level, but he’s never had it shoved down his throat like he does every day either. Rebounding is not for everybody. Some guys would rather stand out and look like a tuxedo — pretty on the outside, but not very tough on the inside. Justin, he ain’t no pretty boy.”

“That has always been our calling card here has been our depth,” Sampson said. “We don’t beat you with one guy or two guys.”

“I thought we were a step slow,” Temple coach Aaron McKie said. “I thought we missed some passes. With this team, what I tried to explain to the guys, we’re not going to beat them on one side of the floor. We want to try to move the ball and get it from side-to-side. The ball kept sticking.”

The Cougars outrebounded Temple 43-26, including a 15-9 advantage on the offensive boards. Houston used that advantage for a 17-4 edge in second chance points.

Houston outscored the Owls 23-8 to open the second half and extended its lead to 55-30 on a layup by Chaney with 12:20 remaining. Gorham had eight points in the run.

Temple: The Owls had issues with Houston’s size, especially in the paint, where the Cougars held a 30-14 scoring advantage. Temple had 10 assists on 13 made field goals, but the Owls committed 19 turnovers.

Houston: The Cougars won their seventh straight conference opener. Houston committed a season-high 18 turnovers but still held a 19-8 edge in points off turnovers.

Houston’s second leading scorer Marcus Sasser played for the first time since Nov. 29. Sasser had missed the Cougars’ last two games due to injury and COVID-19 protocol. The sophomore finished with five points in 27 minutes. Caleb Mills, the preseason AAC player of the year, was dressed and available but never entered the game. Mills had missed the previous two games because of injury and COVID-19 protocols.

Houston: At Central Florida on Saturday.