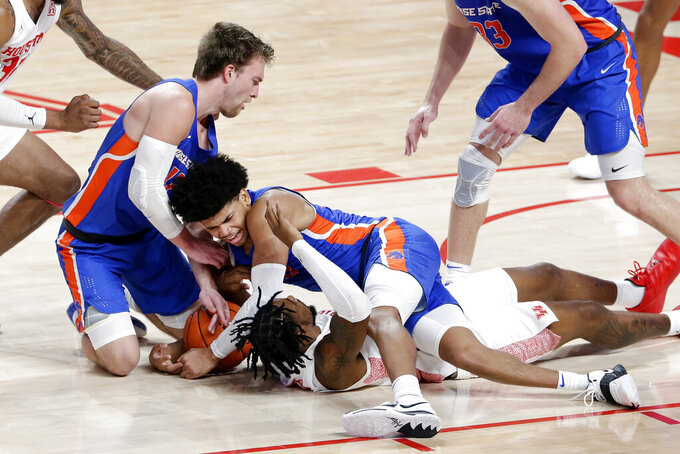 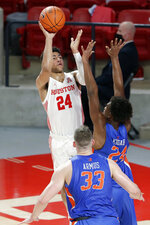 HOUSTON (AP) — Quentin Grimes rebounded from a rough opener by going on the attack.

Grimes had 25 points and eight rebounds, Caleb Mills added 12 points and No. 17 Houston beat Boise State 68-58 on Friday in the Southwest Showcase.

Grimes was 9 of 15 from the floor after scoring eight points on 3-of-15 shooting in an opening victory over Lamar on Wednesday.

Grimes scored 17 first-half points to lead Houston to a 34-19 advantage.

“Quentin got going end of the first half,” Houston coach Kelvin Sampson said. “We went to him and spaced the floor and let him go. … He’s improved in so many areas. He’s a good defender. He’s becoming a good rebounder; he’s getting tougher; he can score.”

Marcus Sasser had 10 points for Houston. The Cougars shot 41%, outrebounded Boise State 49-26, and had a 15-2 advantage in second-chance points.

Rayj Dennis scored 18 points on 8-of-13 shooting to lead the Broncos in their opener. Marcus Shaver Jr. added 16 points and seven rebounds, and Mladen Armus had 11 points and six rebounds.

“We missed some shots early like a couple lay-ins and a boatload of free throws,” Boise State coach Leon Rice said. “We just dug ourselves too big of a hole. I like what I saw with some of the stuff in the second half.”

Mountain West preseason player of the year Derrick Alston Jr. was scoreless on 0-of-6 shooting. Boise State shot 41%, going 1 of 16 on 3-pointers. The Broncos were 15 of 26 from the free throw line.

Houston used a 21-5 run to open up a 32-14 lead with five minutes remaining in the first half. Grimes scored 15 points in the run, including the final 10.

Boise State: The Broncos struggled early, shooting 29% and hitting 1 of 8 on 3-pointers in the first half. Boise State, which was picked to finish second in the Mountain West, was able to score down low, finishing with 38 points in the paint and got out on in transition, scoring 21 fast-break points.

Houston: The Cougars had five players grab at least five rebounds, led by J’Wan Roberts, who had 14 rebounds. Houston had trouble with turnovers, committing 17, and also ran into foul trouble, with seven players committing at least three fouls. The Cougars were 15 of 17 on free throws.

“My role is not to go and score 15 points a game,” Roberts said. “We have guys to do that. I’m the guy to get them second (chance) points because we have never been a first shot team.”

“This early in the season you have to learn who you are. We haven’t played enough basketball to know who we are yet and who goes where and who does what. … The second game of the year, we got up 20 against a really good team. That tells you how good we can be.” – Sampson on his team learning roles.

Boise State: Plays Sam Houston State in Fort Worth on Sunday as part of the Southwest Showcase.

Houston: Faces No. 14 Texas Tech in Fort Worth on Sunday as part of the Southwest Showcase.