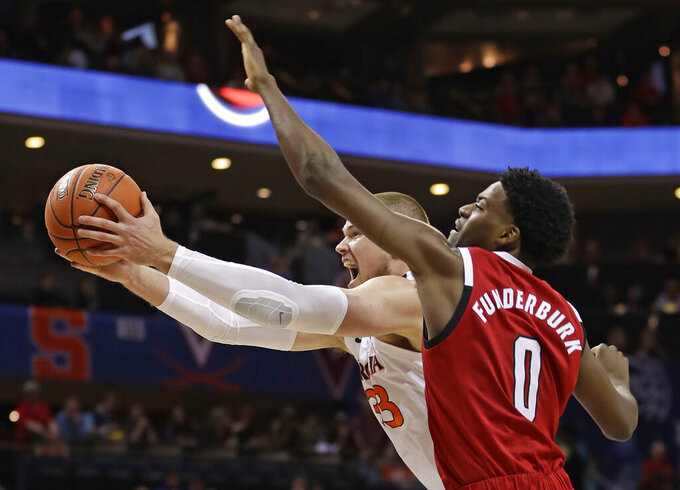 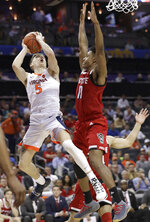 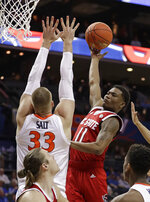 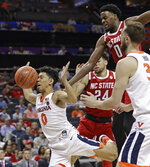 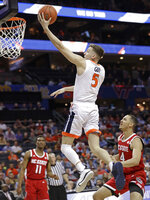 On Thursday, it was the big man's turn to be an offensive star.

"He's a relentless worker, and Jack understands who he is," Virginia coach Tony Bennett said. "He finishes when stuff is there and gets offensive rebounds ... He's one of the best givers I've ever coached."

The 6-foot-10, 250-pound Salt went 7 of 8 from the field. There was an off-balance driving reverse layup while drawing a foul.

"I didn't know if it was real," said Jerome, with a chuckle.

Salt even picked up a technical foul for swinging on the rim too long after a dunk.

"I haven't jumped that far and dunked in a while, and so I had to hold onto the rim or else I would have fell on my head," Salt said. "So I was pretty surprised on that one."

Of course, anyone could forgive the New Zealander's zeal on a day like this.

He had cracked double figures in scoring just once all year while dealing with bouts of back trouble and gone scoreless in five straight games. Yet Salt was the improbable star for Virginia (29-2), even on a day when Guy went for 29 points to flirt with his own career high.

Virginia looked to be in for a fight to the final horn after trailing 29-27 at halftime. But Guy, Salt and the rest of the Cavaliers dominated the eighth-seeded Wolfpack (22-11) after halftime, shooting 63 percent with long runs of efficient offense to go with the typically tough defense.

Markell Johnson had 13 points to lead N.C. State, which shot 39 percent and made only 15 of 25 free throws. The Wolfpack led by six midway through the first half before fading.

"I don't think we wasted an opportunity because I don't think we played that much greater than them in the first half," Wolfpack coach Kevin Keatts said. "They just played better than us. They made plays. They got and-ones. They made their free throws. And for us in the second half, we didn't get those breaks."

N.C. State: The Wolfpack arrived in Charlotte on the NCAA Tournament bubble and on the cut line for many mock brackets. But N.C. State helped itself with Wednesday's second-round comeback from 18 down to beat fellow bubble team Clemson. N.C. State is ranked 32nd in the NET and 3-8 against Quadrant 1 teams.

"I think our resume speaks for itself," Wolfpack big man Wyatt Walker said.

Virginia: Virginia is going for a second straight ACC Tournament title, and more beyond that in the NCAAs. Getting reliable interior production from Salt would be a significant boost to Virginia's postseason hopes.

"Guys try to take away shots from Kyle, De'Andre and myself," Jerome said. "They try to play where the big man hedges hard, usually off our ballscreens when Jack can roll and finish at the rim and make free throws. It's huge for us because they have to respect him offensively, too."

N.C. State's Braxton Beverly (seven points) went 0 for 5 from behind the arc, pushing him to 3 of 23 on 3-pointers in the last four games.

"As long as you're confident in your shot like Kyle Guy, you know you're going to hit shots," Beverly said. "You just have to be confident every day and keep working."

N.C. State: The Wolfpack will await its postseason fate on Selection Sunday.

Virginia: The Cavaliers advanced to Friday's semifinals to face 12th-ranked and fourth-seeded Florida State, which edged No. 16 Virginia Tech in overtime on Thursday.