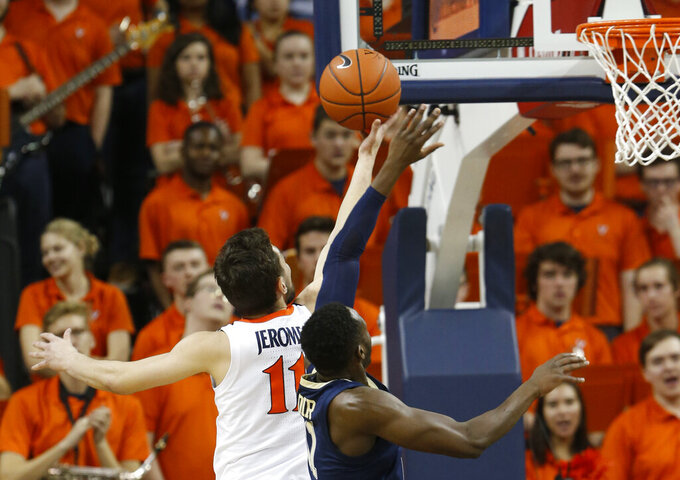 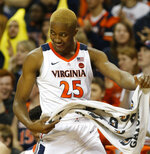 He did more than enough with that action, hitting five 3-pointers and scoring 17 points as No. 2 Virginia beat Pittsburgh 73-49 on Saturday for the Panthers' 12th straight loss.

"We're playing it smart. We've got a game in less than 48 hours," Guy said, referring to Virginia's trip to Syracuse on Monday night.

Ty Jerome added 13 points and De'Andre Hunter scored 12 for the Cavaliers (26-2, 14-2 Atlantic Coast Conference), who maintained at least a share of the lead in the ACC pending North Carolina's game at Clemson later Saturday. The Cavaliers can claim the regular season title by winning their last two games because they beat the Tar Heels in their only head-to-head matchup.

Jerome played less than 25 minutes and wasn't as thrilled with his reduced role, but coach Tony Bennett said his star guards were victims of their own efficiency.

"They did the job early and they did to start the second half, and it was a way to also reward the guys who work hard in practice," Bennett said. "Of course, to be able to do that was important."

Monday's game will also mark the third time since early February the Cavaliers will play on the road on a Monday night after a Saturday home game, and they will be trying for their third consecutive road victory in that scenario. They won 69-61 at No. 5 North Carolina on Feb. 11 and 64-58 at No. 20 Virginia Tech on Feb. 18.

Bennett likes the challenge, which mirrors what teams do in the NCAA Tournament.

"In a sense, you have to be ready to go," Bennett said. "You've got to be smart with your preparation the day in between and you're in, usually, a hostile environment and it's certainly a challenge. We're in some important games and I think it's a healthy challenge."

"I actually thought we did some good things in the game," first-year Panthers' coach Jeff Capel said. "We moved the ball. We got some good shots at time, we got some shots at the basket and we have to be able to finish."

Virginia led 11-10 before Jay Huff's basket sparked a 21-2 run that started with 16 consecutive points. Guy hit three of his five 3-pointers during the surge, and the Panthers went 6:15 between field goals before Sidy N'Dir's driving basket with 5:06 to play in the half. Virginia led 39-19 at halftime.

The Cavaliers, who lead the nation in scoring defense (54.3 points per game) have held 10 teams below 50 points this season.

Guy said while some fans may look at some games as easy victories, the Cavaliers don not.

"We got the greatest lesson learned ever last year," he said, referring to the Cavaliers' 74-54 loss to UMBC in the opening round of the NCAA Tournament, making them the first top seed ever to loss to a No. 16 seed in the history of the tournament. "So even though they're a young team and they may not be the greatest this year, they played really hard."

Virginia: Freshman point guard Kihei Clark played his fourth consecutive game without committing a turnover. He has 15 assists in that span.

Pittsburgh: The Panthers are on the road at Miami on Tuesday night.

Virginia: The Cavaliers have a quick turnaround, playing at Syracuse on Monday night.