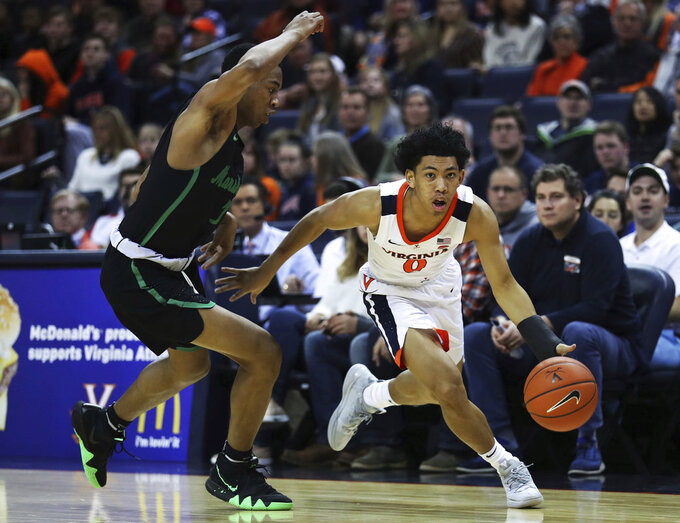 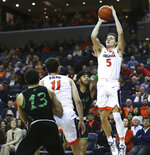 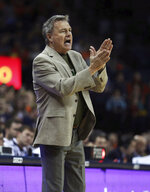 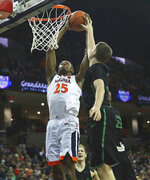 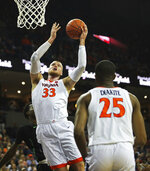 It's more like a responsibility to reward distributors Ty Jerome and Kihei Clark when they make it a point to find him.

"When they go out of their way to find me is when I really feel like I'm @ my best shooting the ball," Guy said Monday.

He was plenty good in the No. 4 Cavaliers' 100-64 victory over Marshall, scoring a career-best 30 points and making 10 of 14 shots overall and seven of nine from 3-point range. He also set a career high with eight rebounds, all in just 26 minutes of work.

Coming up short of a double-double irked him.

"I saw that I had eight rebounds. I tried so hard when I went back in to get two more, but they weren't bouncing my way," he said.

Jerome and Jay Huff added 14 points each for the Cavaliers (12-0), who led 50-25 at halftime, then scored the first 10 points after the break, with Guy scoring eight of them, to remove any possible suspense. The victory was Tony Bennett's 300th as a coach and kept alive Virginia's best start to a season since the 2014-15 team won its first 19 games.

"As good as he is, that makes me mad," he said. "I'm going to get on him. He ain't playing against me like that and we haven't gotten there. We're soft. He's a really good player and I'm not taking anything away from him, but I'm telling you, I'm going to compete.

"Last year, we competed. This year, we're not there," he said.

Jon Elmore scored 14 points but missed 14 of 17 shots for Marshall.

Bennett's 300th victory came in his 419th game, but he said he forgot about it until the subject came up in pregame radio.

"It just means you've had really good players. As I said, it means I've been coaching for a while. I've had great staff and my whole hope is that in my 300 wins that I've honored and respected the game, the people who have poured into my life and what I value as important, and that in the many games that I've lost, I've done the same. That's all that I can ask for," Bennett said. "I'm very grateful."

Marshall: The Herd came in averaging 82 points and with its top two scorers (Elmore, 19.6 ppg) and C.J. Burks (18 ppg) accounting for almost half of them. But Elmore was 0 for 6 with two free throws and four turnovers in the first half, and Burks was 2 for 5 with four points and a technical foul. Burks finished 4 for 11 with 11 points.

Virginia: Bennett has been going to his bench earlier than usual in recent games, possibly trying to incorporate more than seven players in the normal rotation with ACC play looming. Huff, a fan favorite, got nearly seven minutes of playing time in the opening half and had four points, two rebounds and an assist. He is gifted offensively but lacking on the defensive end despite being a very agile 7-footer with an enormous wingspan.

SEND HIM TO ME

"He's skilled," D'Antoni said, noting that one of his assistants tried to recruit Huff. "He would fit us really well. In fact, tell Tony he'll fit us better than he does him. He's a skilled big man. ... He's got a big future."

Marshall: The Thundering Herd stay in Virginia for a game at Old Dominion on Thursday night.

Virginia: The Cavaliers remain at home for their ACC opener on Saturday against No. 9. Florida State.