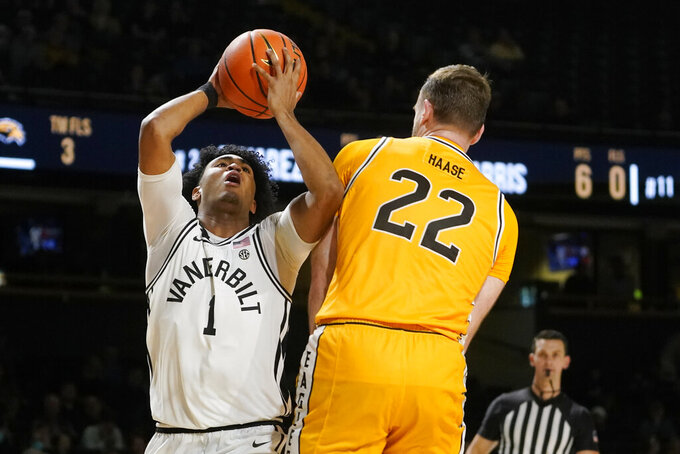 Vanderbilt forward Colin Smith (1) tries to get past Southern Mississippi's Felipe Haase (22) in the second half of an NCAA college basketball game Friday, Nov. 11, 2022, in Nashville, Tenn. (AP Photo/Mark Humphrey) 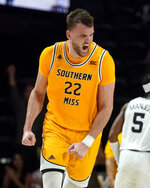 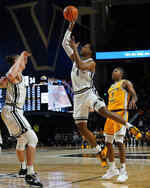 A jumper from Denijay Harris put the Golden Eagles up 48-41 with 8:20 remaining and Southern Miss (2-0) went on to win despite making only two field goals the rest of the game.

Austin Crowley hit a 3-pointer for a 54-48 lead with 1:39 remaining and the Golden Eagles were 6-for-6 from the free-throw line in the final minute to put the Commodores away.

Pinckney had 11 points and 11 rebounds and Crowley scored 13 points for the Golden Eagles. Haase made four of his team's five total 3-pointers. He made 4 of 8 from distance and his teammates were 1 for 16.

Vandy (0-2) closed to within 51-48 on a three-point play by Quentin Millora-Brown with 3:52 remaining, but the Commodores did not score again, going 0-for-10 from the field.

Jordan Wright was the only Vanderbilt player to reach double figures in scoring, with 12 points off the bench. Among the starters, Colin Smith had nine points and 10 rebounds, and Myles Stute had 11 rebounds but only four points.