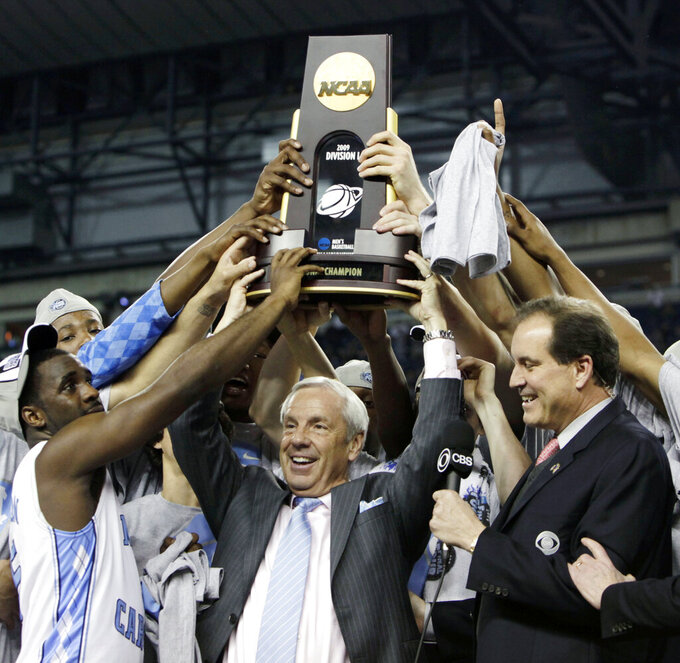 Roy Williams has a Hall of Fame resume filled with more than 900 wins and three national championships in a career leading two of of the most storied programs in college basketball.

So it came as a surprise Thursday when the 70-year-old Williams announced his retirement and said it was more because of what he doesn't have: the conviction that he is still the right coach to lead North Carolina.

During a long, thoughtful news conference on the Smith Center court bearing his name, Williams described himself as a coach who was bothered by losses and by his own mistakes over the past two difficult seasons. One of those saw the only losing record of his career and the other, this season, saw Williams coaching a young group playing amid the COVID-19 pandemic.

Williams had long said he would coach as long as his health remained good.

The stunning news came two weeks after Williams closed his 18th season with the Tar Heels after a highly successful 15-year run with the Jayhawks. In all, Williams won 903 games in a career that included those three titles, all with the Tar Heels, in 2005, 2009 and 2017.

The last time Williams left North Carolina, he was a virtually unknown assistant who was getting his first shot as a college head coach at Kansas after 10 years under late mentor Dean Smith.

Williams had talked about how Smith — who Williams still respectfully calls “Coach Smith" after all these years — worried about how hard Williams took losses as an assistant. That much was apparent Thursday as Williams — often with his voice shaking as he fought back tears — recounted some of his own self-described coaching mistakes.

They were the kind of details he “was really bothered by” as he contemplated his future after a first-round loss to Wisconsin in the NCAA Tournament, his only first-round setback in 30 tournaments.

Williams had thrived with lessons rooted in his time under Smith even as he forged his own style. Williams always pushed for more and typically he got it. His teams played fast, with Williams frantically waving his arms for them to push the ball. They attacked the boards with his preferred two-post style. He stubbornly hoarded timeouts, saying his team should be prepared for most situations through practice.

His competitive drive is fierce and only slightly obscured by his folksy sayings and charm from his time growing up in the North Carolina mountains. And by the end, he won more national championships than Smith's two.

“I could never come close to matching what Coach Smith did,” Williams said. “But every day, I tried to make him proud.”

“Roy Williams is and always will be a Carolina basketball legend,” Jordan said in a statement through his business manager. “His great success on the court is truly matched by the impact he had on the lives of the players he coached – including me. I’m proud of the way he carried on the tradition of Coach Smith’s program, always putting his players first.”

Williams' retirement caught fellow Hall of Famer Mike Krzyzewski at rival Duke by surprise, according to his statement.

“While we were on opposite sides of college basketball’s greatest rivalry, we both understood how lucky we were to be part of it and always tried to represent it in the way it deserved,” Krzyzewski said. "His legacy is secure as one of the greatest coaches in college basketball history.”

After Kansas took a chance on Williams in 1988, he spent 15 seasons there, taking the Jayhawks to four Final Fours and two national title games. Williams passed on taking over at UNC in 2000 after the retirement of Bill Guthridge, but ultimately couldn't say no a second time and returned as coach in 2003 after the tumultuous Matt Doherty era that included an 8-20 season.

Along with the 2005 and 2009 titles, Williams' Tar Heels won in 2017 with a team that included players who had lost the 2016 final to Villanova on a buzzer-beating 3-pointer.

Williams had just one losing season — an injury-plagued 14-19 year in 2019-20 — and otherwise missed the NCAAs only in his first season at Kansas, when he inherited a program on probation, and in 2010 with a UNC team that reached the NIT final.

“I love coaching, working the kids on the court, the locker room, the trips, the ‘Jump Around’ (pregame) music, the trying to build a team,” Williams said. “I will always love that. And I’m scared to death of the next phase. But I no longer feel that I’m the right man.”

When the news conference ended, the grandfather of four walked to his wife, Wanda, took her hand, and the two walked out together.