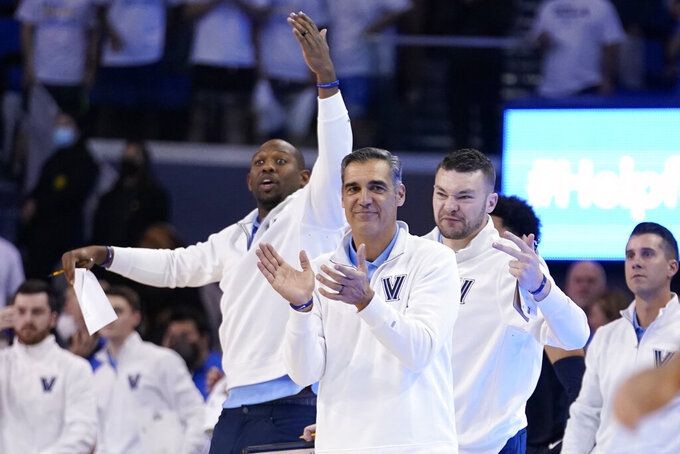 The opening week of the college basketball season, as it usually is, was filled with marquee games.

No. 7 Duke beat No. 13 Kentucky in a battle of bluebloods and No. 3 Kansas knocked off Michigan State in a high-level doubleheader at Madison Square Garden. Top-ranked Gonzaga took down No. 8 Texas in Spokane and No. 2 UCLA outlasted No. 5 Villanova in what may be one of the best games of the season.

The second week is mostly filled with pay-to-play games, with one exception: the Hall of Fame Tip-Off Tournament in Uncasville, Connecticut, this weekend.

The mini-tournament at Mohegan Sun Arena features four AP Top 25 teams. It starts Saturday with Villanova facing No. 17 Tennessee, followed by No. 6 Purdue against No. 18 North Carolina.

The championship and consolation games on Sunday will feature the same four ranked teams.

Villanova (1-1) entered the season as one of the frontrunners to win the national championship with a loaded team and point guard Collin Gillespie back from a knee injury that knocked him out of last postseason.

The Wildcats opened the season with a predictable rout over Mount St. Mary's, then headed cross country to face the Bruins, who have everyone back from last year's Final Four run.

The two highly ranked teams played what felt like an NCAA Tournament game at raucous Pauley Pavilion, with UCLA pulling out an 86-77 overtime victory.

“I think we can be a good team but we still have work to do," Villanova coach Jay Wright said.

After hosting Howard, the Wildcats get another big test against the Vols.

New-look Tennessee (2-0) has rolled through its early schedule, beating UT-Martin and East Tennessee State by a combined 60 points.

The Vols will have a week off before facing Villanova, which should give forward John Fulkerson more time to build up his stamina after returning from a thumb injury against East Tennessee State. The graduate senior had six points and 10 rebounds in 22 minutes.

“We wanted to get Fulky into game shape,” Vols coach Rick Barnes said. “We might have left him in there a little longer than we normally would. There was one time he asked to come out. We need to get him ready.”

North Carolina (2-0) has looked solid in its first two games under new coach Hubert Davis. The former understudy to Roy Williams did well on the recruiting circuit to keep the talent level up in Chapel Hill and the Tar Heels outlasted Brown 94-87 on Friday after rolling over Loyola of Maryland in their opener.

"I was very proud of them, how they responded. Brown was a very good team; played extremely well and we didn’t panic,” Davis said. “Everybody that played in the game made a play that helped our team win.”

Purdue has shown off its versatility through two games, hitting 16 3-pointers in the opener and dominating inside against Indiana State.

“They’re elite on both ends of the floor, have incredible size and great talent,” Indiana State coach Josh Schertz said. “All the hype is legit and they have a chance to be the last team standing.”

No. 4 Michigan is one of the favorites to win a national title and is off to a pretty good start.

The Wolverines opened the season with an 88-76 win over Buffalo and followed that by crushing Prairie View A&M 77-49.

Michigan's road gets a little tougher this week with a game against Seton Hall on Tuesday night, then a trip to Las Vegas to play UNLV, then either Arizona or Wichita State.

The Wolverines' biggest issue so far: free throws. They've missed 27 in two games and are shooting 56.5%.

“We’re not too worried about it,” Michigan center Hunter Dickinson said. “I feel like that’s the one thing we can definitely improve on and that’s something I’m definitely going to work on.”