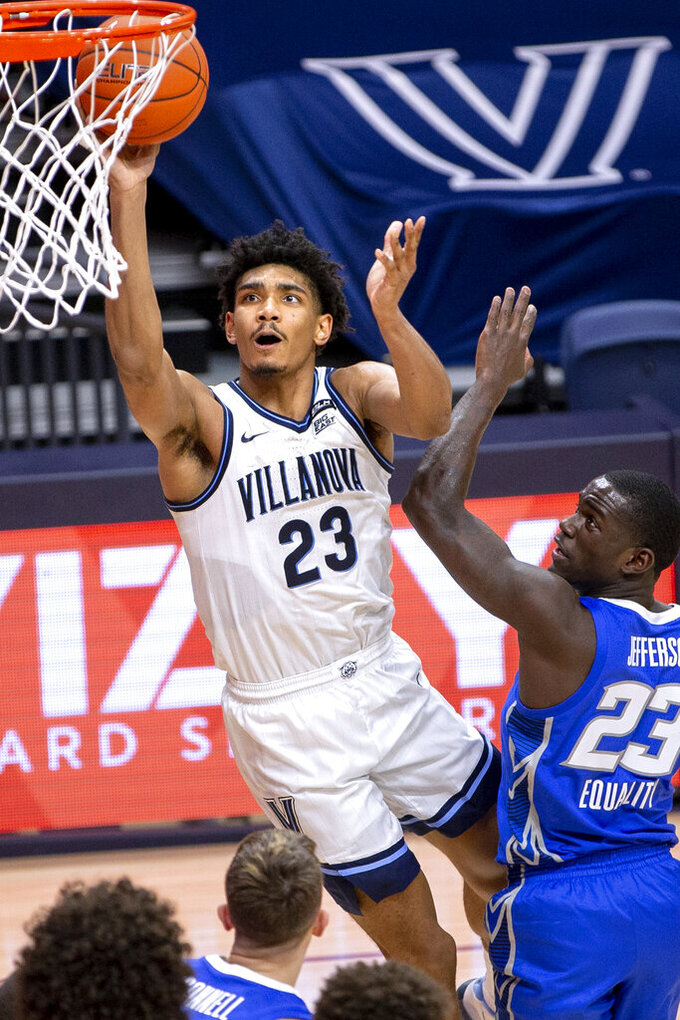 FILE - Villanova forward Jermaine Samuels (23) goes to the basket past Creighton forward Damien Jefferson (23) during the second half of an NCAA college basketball game in Villanova, Pa., in this Wednesday, March 3, 2021, file photo. Villanova coach Jay Wright has yet another team good enough to win a national championship. They return fifth-year stalwarts Collin Gillespie and Jermaine Samuels because of the NCAA rule granting players an extra year of eligibility. (AP Photo/Laurence Kesterson, File)

VILLANOVA, Pa. (AP) — Jay Wright left for Japan on July 2 as a two-time national champion at Villanova and winner of enough coach of the year awards and Big East titles to fill several trophy cases.

He returned to the Main Line campus from a road trip that took him from Tokyo to Springfield, Massachusetts. After helping lead Team USA to an Olympic gold medal as an assistant under coach Gregg Popovich, the 59-year-old Wright was inducted into the Naismith Memorial Basketball Hall of Fame.

So how was your summer?

Wright’s achievements in the winter -- more specifically, in April -- made him a natural choice for the Hall and a lock to keep helping the NBA’s elite drape gold medals around their neck.

If Mike Krzyzewski is Coach K and John Wooden was The Wizard of Westwood, might it be time to assign Wright some catchy nickname?

“Call me good when we win and bad when we lose,” Wright said, with a laugh.

Wright has yet another Villanova team good enough to win a national championship, a feat that would match him with Krzyzewski as the only active D-I coaches with three titles. The No. 4 Wildcats (18-7) were knocked out by eventual national champion Baylor in the Sweet 16 and, thanks to the rule granting players an extra year of eligibility, return fifth-year stalwarts Collin Gillespie and Jermaine Samuels.

Villanova’s veterans eased some of Wright’s discomfort about the personal disconnect from his program while he was in Tokyo or away for Hall of Fame weekend.

“I kind of felt like a little bit of an outsider in the beginning,” he said. “They were all so tight and they had done so much together. But in a good way. You’re so comfortable when you get back here and you get back with your guys and your staff. I saw that they had some good experiences together without me. It was really an interesting perspective.”

Once the hoopla calmed down, Wright felt back home at Villanova, which is set to rename the roadway separating its home court and the practice facility as “The Wright Way.”

Villanova received 10 first-place votes in the coaches’ poll and as the unanimous choice to win the Big East.

“I feel finally back to normal now,” Wright said. “Being in practice mode, knowing where you’re going to be every day. Being with your team, being on campus, being at home. It has been a wild, whirlwind. I wouldn’t trade it for anything. But I’m much more comfortable being at practice, being with the team and being on campus.”

Gillespie was feted on senior night and seemed on his way to a professional career until he tore the MCL in his left knee in Villanova’s Big East clincher. He missed the conference tournament and March Madness but decided to return for one more run. Samuels averaged 15.5 points and 6.8 rebounds in the postseason and gave Villanova's national championship push a major boost when he also decided to play a fifth season.

Gillespie was named the Big East preseason Player of the Year.

“They’re two great leaders who have been in this program for a while now,” guard Justin Moore said.

They served as de-facto coaches during summer workouts.

Wright said he almost felt bad for the freshman, who surely expected more playing time when they were recruited, because the returning players “changes some of their playing time.” But there are positives.

“At this time of the year, you’re not really putting the pressure on them to know that they’ve got to be ready for our opening game against Mount Saint Mary’s,” Wright said. “It can be a little bit more enjoyable to them if they’re intelligent about it, and I think our guys are.”

In just the second game of the season, the Wildcats play Nov. 12 at No. 2 UCLA. There are late November games in the Hall of Fame Tipoff Classic against No. 18 Tennessee and then a game in the same tourney against either No. 19 North Carolina or No. 7 Purdue. Villanova plays Syracuse in the Jimmy V Classic in December at Madison Square Garden and then a Dec. 12 rematch at No. 8 Baylor. The stacked schedule figures to serve as a tougher slate than the Big East season, where only UConn starts the season as a ranked team.