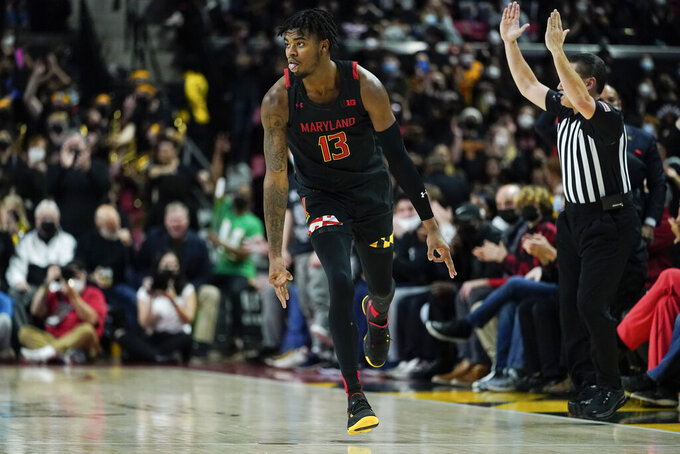 COLLEGE PARK, Md. (AP) — Michigan State has a deep rotation that allows coach Tom Izzo to mix and match his lineups, but the 13th-ranked Spartans still don't have a consistent, go-to scorer.

Perhaps it was no surprise, then, that a veteran reserve came through late in a raucous Big Ten road game against a Maryland squad that's played its best against ranked foes.

Malik Hall made a driving layup with 1.9 seconds left, and Michigan State survived Maryland's second-half rally to beat the Terrapins 65-63 on Tuesday night.

Hall led the Spartans (17-4, 8-2 Big Ten) with 16 points, and Joey Hauser and Marcus Bingham Jr. had 10 apiece as Michigan State followed a home win over rival Michigan by doing just enough against the Terps.

“Malik has had a hell of a year. Him and Joey together, the relationship they have, the fact that Malik could be a starter, and he's come off the bench and he could be the sixth man of the year. He's done that continuously and he's getting better and better,” Izzo said. “We do so many different things with him because he's so versatile.”

Eric Ayala scored 15 points and Donta Scott had 14 for Maryland (11-11, 3-8), which rallied from a 15-point second half deficit to tie the score twice within the final three minutes.

“Effort, energy and juice, being able to feed off the crowd when we were able to get stops and deflections, was really big for us,” interim coach Danny Manning said. “That gave us a chance to be in the ballgame.”

Standout freshman Max Christie was held to seven points for the Spartans, who hadn’t won with him scoring in single digits since Dec. 11 against Penn State. Leading scorer Gabe Brown finished with five points on 1-of-7 shooting.

Maryland had a chance to take the lead with less than 30 seconds to go, but Jaden Akins stripped the ball from Fatts Russell to set up Hall's winning basket.

Bingham made a 3-pointer with 8:09 left, the 7-footer's second of the game and sixth of the season, to put Michigan State ahead 57-50, but the Spartans followed with a nearly five-minute stretch in which their only points came when Maryland’s Qudus Wahab was called for goaltending on a drive by Akins.

“Should have been able to close it out. We didn't,” Izzo said. “It was because of them playing well, and harder than hell.”

Maryland tied it on Russell's 3-pointer with 2:49 to play and again on Scott's two free throws with 2:20 left, but the Terps didn't score again, missing their last three shots.

Michigan State appeared to take control with a 17-2 run spanning halftime, but Maryland responded with an 11-0 burst and kept it close the rest of the way, in contrast to its 68-55 loss to Indiana on Saturday.

“We just fought possession, man,” Russell said. “The Indiana game, that wasn't Maryland basketball. We talked about it. The fight wasn't there. Today we came out here and we had a solid fight, 40 minutes.”

Maryland has lost four of six and has yet to generate any consistency under Manning, who took over after Mark Turgeon agreed to step down in early December.

But the Terps are 2-2 against ranked opponents, and their other loss was 70-69 to then-No. 23 Wisconsin. Maryland has several more opportunities against the Big Ten's best, with games at No. 16 Ohio State and No. 4 Purdue, a visit from Ohio State and a rematch with the Spartans in East Lansing to close the regular season.

Michigan State was predicted to finish sixth in the Big Ten, one spot behind Maryland. But the Spartans' mix of veterans, young players and transfers has Izzo's squad in a familiar position: contending for a conference title and a strong NCAA Tournament seeding.

Izzo has substituted freely, with Christie the only player averaging more than 30 minutes per game. He used 11 players on Tuesday night to Maryland's eight. However, the Spartans were limited down the stretch with Christie and Brown going cold and Hauser, Bingham and Julius Marble in foul trouble.

“We just didn't do the things you've got to do to be a great team, so we're still a work in progress,” Izzo said.

RIVALRY IN THE MAKING?

The Terps have played the Spartans tough since 2014-15, their first season in the Big Ten. The Spartans improved to 11-8 overall against Maryland and 8-6 in league play. Michigan State lost to the Terps twice last season, including in the Big Ten tournament.

The Spartans have hovered between the 10th and 15th spots in the AP Top 25 for the past several weeks. Beating Maryland likely won't change much, but if the Spartans get another road Big Ten win in their next game, against Rutgers, they could move up a spot or two.

Michigan State: At Rutgers on Saturday.

Maryland: At No. 16 Ohio State on Sunday.