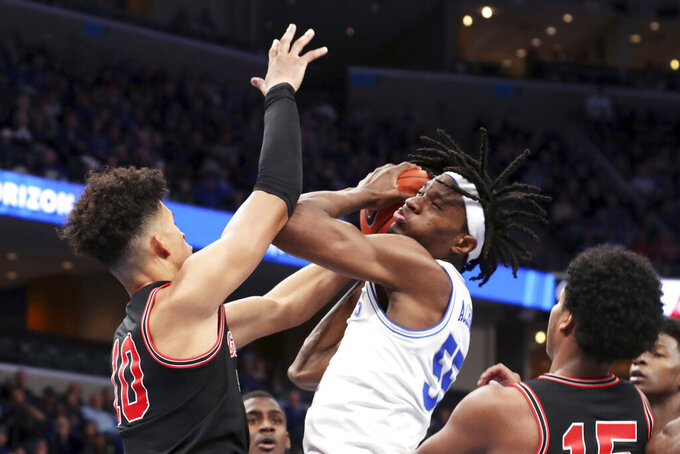 MEMPHIS, Tenn. (AP) — Tom Crean and Georgia finally grabbed a win over an AP Top 25 team despite the Bulldogs' two leading scorers struggling with their shooting.

“We’re very proud of this win,” Crean said. “And we did it against a heck of a team. That was a big, big win for us.”

Hammonds went 7 of 18 from the field for Georgia and Edwards was 4 of 17. But the Bulldogs got help from Donnell Gresham Jr. (12 points) and Sahvir Wheeler (10 points, seven assists).

“It was a team victory and so many guys did different things to impact the game,” Crean said.

Precious Achiuwa led Memphis (12-2) with 20 points and 15 rebounds, while Alex Lomax finished with 11 points. Boogie Ellis scored 10 for the Tigers, who lost for the first time since Nov. 12 to Oregon. Forward DJ Jeffries, who averages 12 points, was held out with an illness.

The game was close throughout with 10 ties and 20 lead changes. Neither team could build a lead of more than eight points. But it also was sloppy with turnovers — Memphis committing 22, Georgia 17 — and neither team shot better than 40%.

“Neither team played a great game, a pretty game,” Crean said, “but (it was) a hard-played game. We were fortunate to get the win.”

The key was Georgia (10-3) closing the game on a 6-1 run as both teams missed opportunities down the stretch. Memphis did not score a basket after Achiuwa’s 3-pointer with 4:35 remaining.

“We had a couple of chances to knock them out,” Memphis coach Penny Hardaway said. “We went up seven one time, and eight the next time, and just couldn’t do it. When you let a team hang around, this is what can happen.”

Achiuwa and sophomore guard Alex Lomax (11 points, four assists) noted the scoring drought in the closing minutes was as much about inexperience for a young team than anything else.

“I feel like that was a game we could have won. It just came down to the last four minutes,” Achiuwa said. “We have to follow (the game plan) every time down the stretch. The last four minutes, that’s kind of what happened. We lost focus, and this is a good learning experience moving on.”

Georgia: Despite its leading scorers — Edwards and Hammonds — struggling, Gresham, who averages 6.8 points, helped make up the difference. Wheeler had a key basket with 1:03 left to give Georgia a 64-61 lead. Memphis would only counter with a single free throw the rest of the way.

Memphis: The game was evenly played on the stat sheet, but the Tigers faltered at the foul line, converting 11 of 20 free throws. In the final 44 seconds, still within one possession, Memphis missed two of its three free throws. “You want to make more than 11 out of 22 free throws at home,” Hardaway said. “We lost by three points.”

Georgia did not receive any votes in last week’s AP poll. A win over the No. 9 Tigers should at least draw some attention from voters. Meanwhile, Memphis will probably drop in the rankings.

DIFFERENCE DOWN THE STRETCH

Memphis had opportunities during that four-plus minutes without a field goal down the stretch. The Tigers missed four shots in that span and had a couple turnovers. The Bulldogs' lead never reached more than three in the final minutes.

Georgia: Hosts Kentucky on Tuesday in its SEC opener.

Memphis: At Wichita State on Thursday.