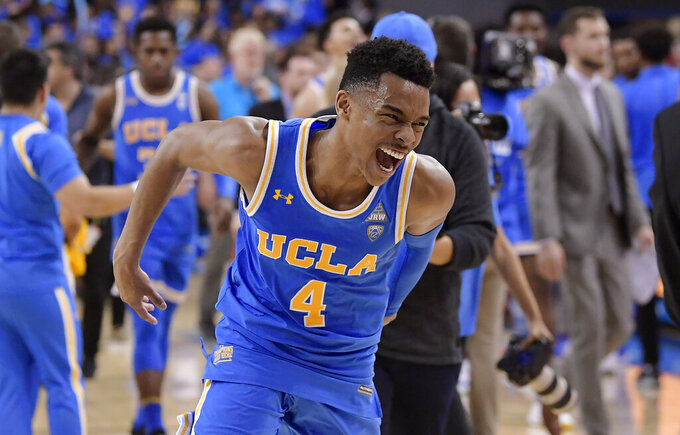 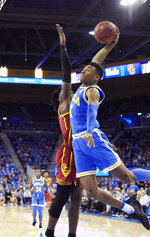 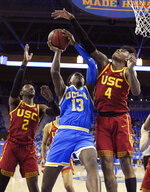 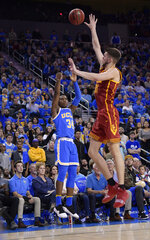 LOS ANGELES (AP) — Clinging to a one-point lead in overtime, Kris Wilkes was about to put up a shot for UCLA. Southern California's defense collapsed on him and he spotted Jaylen Hands.

Wilkes sent a touch pass to Hands, who hit a deep 3-pointer that beat the shot clock with 22 seconds remaining and helped UCLA defeat USC 93-88 on Thursday night for its third straight win.

"That was a great shot," Wilkes said.

Hands said, "There was two people on him so it was a really good pass."

"We've had some up and down patches during the last 16 games but we've kind of got things a little more figured out now," interim Bruins coach Murry Bartow said.

Wilkes and Jules Bernard added 16 points each, Chris Smith had 13 points, and Moses Brown had 10 points and 14 rebounds for the Bruins in their last regular-season home game. Wilkes didn't practice the previous two days because he was ill and nearly didn't play.

"We was talking about how we were in shape before the game, but man, that was intense," he said.

Jonah Mathews added 17 points. USC tied its season high with 19 3-pointers on 50 attempts and had a season-best 28 assists.

"On paper, you're supposed to win those games," Mathews said, "but yeah, that's basketball."

The Bruins outscored the Trojans 11-6 in overtime when UCLA never trailed.

USC closed to 89-88 on Boatwright's seventh 3-pointer of the game, but the Trojans never scored again.

Hands' 3-pointer went in from the top of the key and Bernard hit 1 of 2 free throws to finish it off.

"That spot right there has been pretty darn good to him the last three games," Bartow said of Hands.

"Our team has been playing really good lately," Hands said. "We haven't had any letdowns in spirit or belief in ourselves."

Neither team led by more than four points over the final 7:05 of regulation. The game was tied three times in the last six minutes, including 82-all on Smith's jumper with 1 minute to go.

Boatwright and Hands each missed 3-pointers. Elijah Weaver grabbed the rebound of Hands' miss and called timeout with 18 seconds to go.

Boatwright missed a potential game-winning 3 at the buzzer to force overtime, with Bernard grabbing the defensive rebound.

"Unfortunately this year the ball hasn't bounced our way at the end in quite a few of those games," USC coach Andy Enfield said. "If those balls go in, we have a different record."

In the extra session, Bernard hit a jumper and David Singleton made the Bruins' 10th 3-pointer of the game for an 87-82 lead.

Boatwright and Shaqquan Aaron each missed 3-pointers before Weaver hit one to get the Trojans to 87-85.

But USC clawed back, making seven 3-pointers over the final 10 ½ minutes, including four by Boatwright. He came into the game having hit 19 3-pointers in his three previous games.

Nick Rakocevic was held to six points — well below his 15.1 average — while in foul trouble and had nine rebounds for USC. He fell on the baseline and grabbed his right knee early in the second half, but returned to play without pain, Enfield said.

Boatwright's 3-pointer put USC ahead by four, but the Trojans missed all seven of their field-goal attempts to end the first half. Bernard's 3-pointer gave UCLA a 41-38 lead at the break.

USC: The Trojans are in a funk with two road games left in the regular season. They want to finish among the top four in the Pac-12 to earn an opening-round bye in the league tournament, which represents their only chance to make the NCAA Tournament.

UCLA: The young Bruins are maturing at the right time, having won four of five going into their last road trip of the regular season. They also are angling to avoid playing an opening-round game in the league tourney next month in Las Vegas.

As solid as Hands is offensively, his defense needs work. He didn't start in overtime because Bartow wanted to stick with the five players who got a key stop on Boatwright's 3-point attempt.

"He's catching the eyes of the NBA because he's got speed, he can pass, he can distribute," Bartow said of Hands. "Defensively, we need him to be better and he knows that. That's where he's got to grow a little bit more."

Hands said, "I have to get better on that end."

"I'm proud to be their coach right now. It may not last much longer." — Bartow.

USC: Visits Utah on March 7 and Colorado the next day to close the regular season.