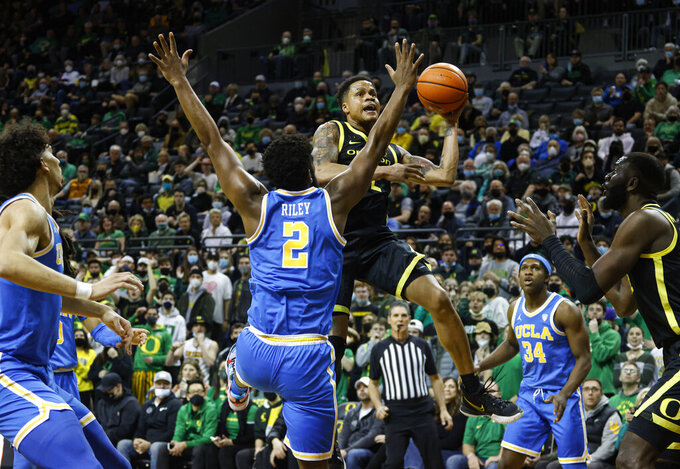 “I thought our guys played hard and this time of year, that’s all we can ask,” Oregon coach Dana Altman said. “We didn’t execute some things and had some bad turnovers, but the crowd was great and that helped us, no doubt.”

Tyger Campbell and Cody Riley each scored 12 points to lead UCLA (20-6, 12-5). Jaime Jaquez Jr. added 10 points before fouling out. UCLA’s leading scorer, Johnny Juzang, scored seven points in 11 minutes before leaving the game in the first half with a right ankle injury.

UCLA coach Mick Cronin did not have an injury update on Juzang, who ranks second in the conference averaging 17.5 points.

“It is hard to win when you go 4 for 24 on 3’s against a team that is fighting for its tournament life,” Cronin said.

Oregon completed a season sweep of the Bruins as it looks to improve its chance of earning a berth in the NCAA Tournament.

“I keep talking to them about one game, we have to get ready,” Altman said. “When we play USC on Saturday, it will be the same thing. They know where we are at; we are not in great shape. Our only hope is to keep winning games, nothing else. We’ve got some bad losses to try and overcome.”

Oregon took a five-point lead at halftime before stretching the margin to 40-31 on a 3-pointer by Harmon. After Jules Bernard scored to cut the lead to 42-35, Oregon scored six straight to take a 48-35 lead on a basket by Richardson.

Oregon went ahead 53-44 on a free throw by Young before UCLA scored 10 straight points to take the lead on a rebound basket by Jaquez with 5:23 left to play.

Young added a jumper to push Oregon ahead 57-54 before Harmon added two free throws. Riley converted a 3-point play to get the Bruins within 59-57 with 2:55 left to play.

Harmon followed with a 3-pointer and N’Faly Dante dunked for the Ducks.

After Harmon scored to give Oregon a 7-6 lead, the Ducks never trailed the rest of the first half before taking a 35-30 lead at the break.

UCLA followed with six straight points to tie the game before Kepnang dunked and Harmon scored four straight to push the Ducks ahead 32-27. Richardson hit a 3-pointer for the Ducks before Riley capped the half with a bucket for the Bruins.

UCLA: The Bruins dropped to 12-5 in the conference, one game ahead of Oregon as the Ducks hold a tiebreaker due to sweeping the season series.

Oregon: The Ducks improved to 11-6 to stay in sole possession of fourth place as it looks to secure a top-four finish and first-round bye in the conference tournament. … Oregon is 40-90 all-time against UCLA, but 14-9 under Dana Altman including four straight wins over UCLA.