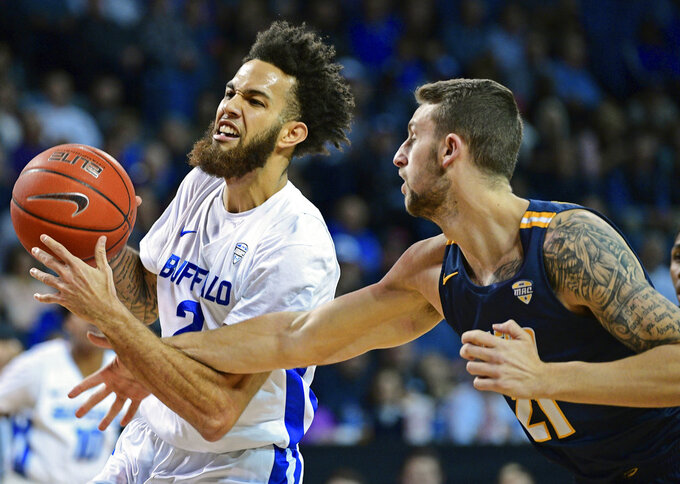 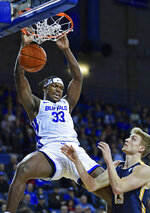 AMHERST, N.Y. (AP) — Coach Nate Oats put together a challenging non-conference schedule in order to toughen up Buffalo for the start of the regular season.

After spending the past two months knocking off the likes of West Virginia, Syracuse and San Francisco, the No. 19 Bulls have begun rolling over their Mid-American Conference opponents.

And it turned what was supposed to be an early season test for Buffalo, which defeated the Rockets 76-66 in the MAC championship game 10 months ago, into a laugher.

"If people wanted to question how quality our wins were, if we belonged in the Top 25, we wanted to put that all to rest right out of the gate," he added, before referring to Toledo's record, which fell to 12-3. "They've beaten some pretty good teams. It's not a bad team we just demolished out there."

Rockets coach Tod Kowalczyk wasn't in much of a position to argue.

"I thought we played extremely frustrated and with a lack of composure," Kowalczyk said.

"Give them credit, they're every bit as good as 19th in the country if not better," he added. "When they've got guys shooting like they did tonight, they can beat anybody in the country."

Harris scored 20 points in the first half alone and finished hitting a career-best six 3-point baskets in a game in which all 11 Bulls players scored at least 2 points, and five reached double digits.

Marreon Jackson scored 20 and Chris Darrington added 21 for Toledo, which was coming off a MAC-opening 79-64 loss to Ball State on Friday. The Rockets' leading scorer Jaelan Sanford hit just 1 of 10 for 3 points.

The game was essentially over in the first half when Buffalo opened by scoring 18 of the first 22 points capped by Perkins' dunk on the transition 5:07 in.

The Rockets hit just nine of their first 23 attempts, including going 2 of 8 from 3-point range through the first 16 minutes.

After trailing by as many as 20 in the first half, the Rockets mustered a brief comeback bid by cutting Buffalo's lead to 64-51 on Nate Navigato's eight-foot jumper from the paint with 14:32 left.

The Bulls responded by going on a 13-0 run over a 3:11 span and capped by Davonta Jordan scoring on a transition layup.

Buffalo then broke the game open by building a 93-63 lead with 7:37 left, when Graves punctuated a transition break with a dunk that got the crowd on its feet.

The Bulls scored 24 points off 17 Toledo turnovers, and 38 points on the fast break.

As for Harris, he shrugged off what's been an inconsistent season in which he's been bothered by a nagging hand injury.

He credited his teammates for continuing to believe in him.

"All the credit to my teammates in knowing that I was feeling it a little bit tonight, and they found me the shot," Harris said. "I've been struggling. And now that I hit a couple of shots, they wanted me to shoot almost every shot I can."

Kowalczyk expressed concern over how Toledo has lost two straight for the first time since Feb. 17-20 of last season. The Blades have also not had a lead in each of their past two games.

"We've lost our edge. I am concerned. But we'll find a way to get this team back on track," he said. "We're a good team. We've got high-character guys. But we've got to start playing."

Toledo: A relatively weak non-conference schedule might have boosted the Rockets record, but hasn't helped them get ready for MAC play.

Buffalo: Have won three straight and outscored their competition by a combined 271-210 since a 103-85 loss at Marquette on Dec. 21.

Toledo: At Western Michigan on Saturday.