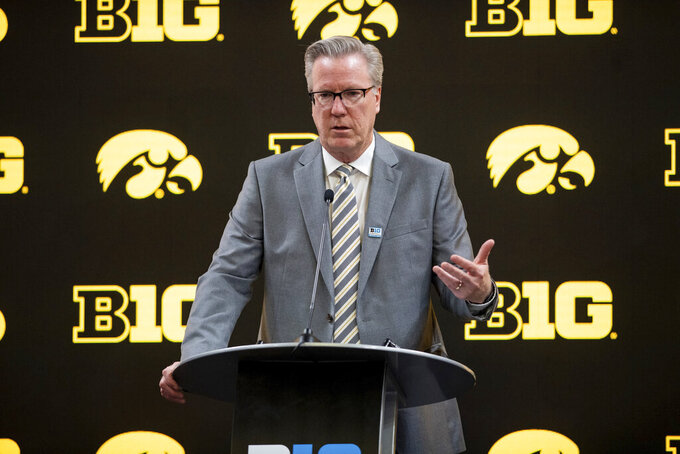 FILE - Iowa men's head coach Fran McCaffery addresses the media during the first day of the Big Ten NCAA college basketball media days, Thursday, Oct. 7, 2021, in Indianapolis. McCaffery goes into this season without two players who combined to average nearly 40 points and 15 rebounds per game last season. Both were NBA draft picks, one was national player of the year. Yes, Iowa's 12th-year coach has his work cut out for him. (AP Photo/Doug McSchooler) 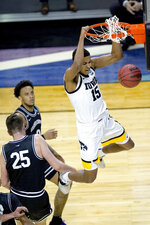 IOWA CITY, Iowa (AP) — Fran McCaffery goes into this season without two players who combined to average nearly 40 points and 15 rebounds per game last season. Both were NBA draft picks, one was national player of the year.

Yes, Iowa's 12th-year coach has his work cut out for him.

“This is going to be a really new experience for all of us,” McCaffery said. “When you graduate the national player of the year, have two guys going to the NBA, and a team of really talented young players, all of whom are now going to be in a new role, I think that’s an exciting challenge for any coach.”

Luka Garza, the player of the year, and Joe Wieskamp were productive game in and game out for the Hawkeyes, who were 22-9 and reached the second round of the NCAA Tournament.

“Obviously, losing them, we would like to have them back, but we weren’t really counting on them being here,” said guard Connor McCaffery, Fran’s son. “We knew we were going to be in a year when guys were going to have to step up. It’s not like you’re going to replace the national player of the year. Nobody is. So what you have to do is have other guys come together to make it up as a whole.”

Iowa might have found its next standout in forward Keegan Murray, who started four games and was named to the Big Ten's all-freshman team after averaging 7.2 points and 5.1 rebounds.

“Yeah, he’s ready,” Fran McCaffery said. “He’s a confident kid. He stays within himself. Nothing seems to really rattle him at all."

Connor McCaffery and Jordan Bohannon return as starters. Bohannon, the top returning scorer at 10.6 points per game, will shift to the shooting guard position to open the point for Joe Toussaint.

Bohannon comes back with a chance to break the Big Ten record for career 3-pointers. He has 364, just 10 off the record set by Ohio State’s Jon Diebler from 2008-11.

The 24-year-old Bohannon enters his sixth season, and his age has been a source of humor.

Asked how many “old man” jokes he gets, Bohannon said, “Enough. I got it last year, too. I was like, ‘You guys have got to come up with something else.’”

Coach McCaffery said Connor, who started every game the last two years, might come off the bench this season. He had offseason surgeries on both hips. Connor also plays baseball for Iowa and practiced with both teams in the fall.

Kris Murray, Keegan’s twin brother, didn’t get many minutes last season because more experienced players were ahead of him. Fran McCaffery said Kris needed time to develop, and now he must gain confidence.

“Kris is going to be a major factor on this team and he needs to be,” the coach said.

North Dakota transfer Filip Rebraca was an All-Summit League second-team pick last season who averaged 16.8 points and 7.6 rebounds. He has two years of eligibility. He found quickly that the Big Ten isn't anything like the Summit League.

“There were a few times Keegan Murray got to my shot,” the 6-foot-9 Rebraca said. “I figured then I had to take a different approach.”

The Hawkeyes play six straight at home beginning with their Nov. 9 opener against Longwood. They visit No. 25 Virginia in the Big Ten/ACC Challenge on Nov. 29. Conference play starts at No. 7 Purdue on Dec. 3, and the Cy-Hawk Series game against Iowa State is in Ames on Dec. 9.