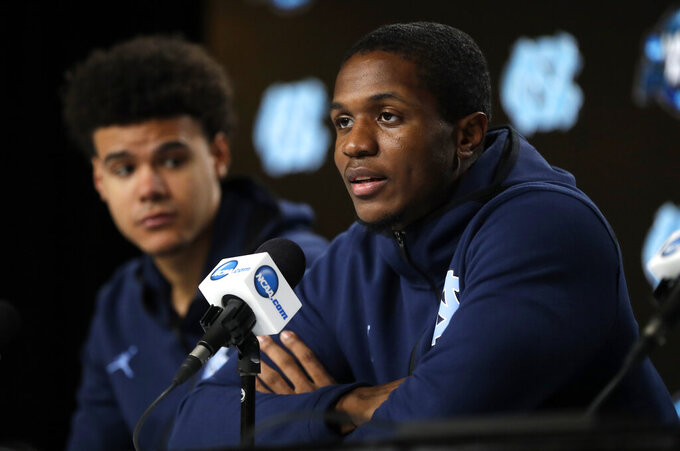 KANSAS CITY, Mo. (AP) — North Carolina guard Kenny Williams is ready to go against Auburn in the NCAA Tournament after straining his hamstring last weekend, while top bench player Nassir Little is questionable with the flu.

Williams was injured early in the second half of the top-seeded Tar Heels' win over Washington to reach the Sweet 16. He practiced a bit Wednesday in Chapel Hill and planned to practice again Thursday in Kansas City before the Tar Heels play the Tigers on Friday night.

"My hamstring is feeling pretty good," said Williams, the Tar Heels' best defensive stopper, who is averaging 8.5 points and 3.5 assists. "I don't think it'll be any setback for me."

Even if Little can play, he won't be close to 100 percent.

The 6-foot-6 freshman spiked a fever and was held out of practice Wednesday, and coach Roy Williams said his top player off the bench looked even worse on Thursday. Little skipped breakfast and did not accompany the team to Sprint Center for its shoot-around ahead of its Sweet 16 matchup.

"I can say it's hard to make a 180-turn because there's no way in the world he could play if we were playing today," Roy Williams said. "He's sitting there and he has a plate in front of him. He felt — it looked to me like it was hard to pick up the fork. And last time I looked, it wasn't that heavy."

Little arrived at North Carolina with one-and-done expectations, but he has gone through plenty of pits and valleys as a freshman. But he also seems to have found his stride in the postseason, scoring 19 points in a first-round win over Iona and 20 against the Huskies last weekend.

Little is averaging 10 points and 4.7 rebounds this season.

"We've played without Nassir in moments already this year," Roy Williams said. "He was playing his best basketball — his basketball was going up and up and up — and he sprains his ankle and doesn't play much in the Virginia game, and he gets poked in the eye the next game or vice versa.

"In the last two games last weekend, he was sensational. If he's going to play like that all the time, we're going to miss him, because we don't have anybody that can do those things he did."

However, the Tar Heels have plenty of depth. Brandon Robinson and Seventh Woods can soak up some of the minutes, and Kenny Williams said the starters can shoulder some of the burden.

"Of course, we want him out there. We don't want anybody to not be able to play," Kenny Williams said. "Nas is just someone that can come off the bench and give you 15, 20 minutes and he'll be a factor. But if he's not there, it's nothing that we're not used to. We're used to guys not being able to play."

The Tar Heels proved that in the last round against Washington.

Even before Williams hurt his hamstring, forward Garrison Brooks took an elbow right in the mouth from the Huskies' Noah Dickerson. One tooth was knocked out, another was chipped and his lip cut. Brooks missed the final 12 minutes of the first half to get stitched up.

He returned for the second half, and the rest of the repair work took place after the game. He showed up at Sprint Center with a thin wire brace stretched across his front six teeth. He plans to wear a mouth guard when the Tar Heels take the floor on Friday night.

"Hindsight," he said, laughing. "I would have worn one since day one."