Hepburn, Badgers win in his emotional homecoming to Nebraska 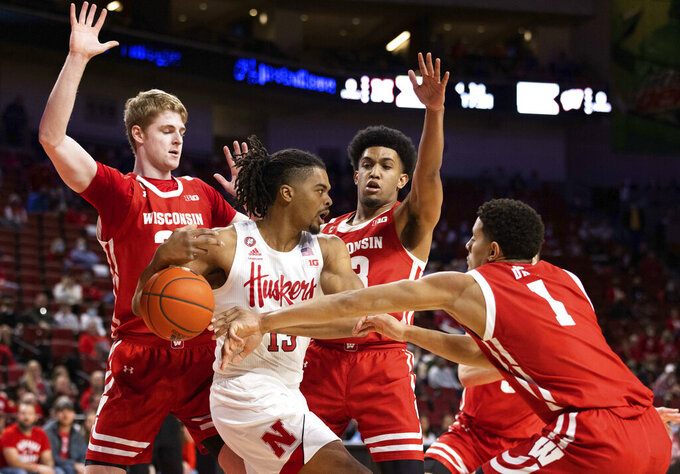 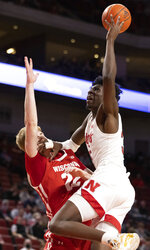 LINCOLN, Neb. (AP) — It should have been a day of celebration for Wisconsin freshman Chucky Hepburn.

He returned to his home state to face the Nebraska Cornhuskers on the same court where he played two state high school championship games, and he scored 13 points and made two key steals as the 11th-ranked Badgers won 73-65 on Thursday.

A pall was cast over what should have been a joyous occasion. While his teammates returned to Madison after the game, he went home to Omaha for the funeral for a man the Hepburn family had taken in and was essentially a brother to Chucky.

Vincent Burns, 20, was fatally shot outside an Omaha bar on Sunday night. No arrests have been made. Burns had known the family since grade school, and Greg Hepburn, Chucky's father, was Vincent's godfather.

“When you have good support around like this team,” Chucky said, “they help you get through. I struggled the first part of the week, but I got through it eventually.”

Wisconsin (16-3, 7-2 Big Ten) bounced back from a 12-point home loss to Michigan State last Friday to win for the eighth time in nine games. The Badgers have won five straight conference road games.

Brad Davison scored 17 of his 21 points in the first half, and the Badgers used 10-of-22 shooting on 3-pointers to overcome 37% overall shooting and a slow start by Johnny Davis, who was held to a season-low 13 points.

The game originally was scheduled for Tuesday but was pushed back two days to allow Nebraska to come out of a COVID-19 pause.

The delay helped Hepburn to gather himself after finding out early Monday that Burns had been killed.

“It was going to be emotional anyway just because it’s a chance to come back home where he’s won a state championship and those things,” Wisconsin coach Greg Gard said, “but then you have the events of earlier this week. These guys love the game of basketball, and when they can get a chance to compete, as he referenced several times, I think it’s very therapeutic.”

Hepburn, who played high school basketball 45 minutes away in Bellevue, had 28 family and friends in attendance. The crowd for the rare weekday matinee was small, but Hepburn received a burst of cheers during introductions and scored the game’s first basket with a 3 from the wing.

He got some razzing from the student section when his next shot from the same spot glanced off the bottom of the net for a near air ball.

Hepburn’s third 3-pointer with 9:28 left in the first half gave the Badgers the lead for good, 23-21, and they built the cushion to as many as 18 points midway through the second half.

McGowens’ falling-down 3-pointer and one-handed bank-in got Nebraska back within 57-50. The Badgers went more than six minutes without a field goal before back-to-back steals by Hepburn led to fast-break layins that pushed the lead back to 63-50 with 4 minutes left.

Hepburn had been recruited heavily by former Nebraska coach Tim Miles and seriously considered signing with the Huskers. But his interest waned after Miles’ firing, and he became the first true freshman to start an opener for Wisconsin since 2001.

“It feels good to know Nebraska fans weren't as mad when I committed to Wisconsin,” Hepburn said. “They want me to be happy, and that’s all that matters.”

Davison set the Wisconsin record for career 3-pointers, shooting 5 of 8 to push his total to 274 in 147 games. It was fitting the record fell in Lincoln — Davison is 21 of 39 on 3s (54%) in five games at Pinnacle Bank Arena, and he set the school record with eight in a win here two years ago.

Wisconsin: It didn't matter that Davis, who's averaging 24.4 points per game in Big Ten play, was off his game. With Davison leading the early 3-point barrage, the Badgers continued their dominance of Nebraska. They've won seven in a row in the series and 15 of 19 since Nebraska joined the conference in 2011.

Nebraska: It isn't getting any better for embattled third-year coach Fred Hoiberg. The Huskers have lost nine straight to open conference play for the second straight season, their program-record losing streak against ranked opponents stands at 23, and last week senior guard Kobe Webster called out Hoiberg in a radio interview for not holding players accountable.