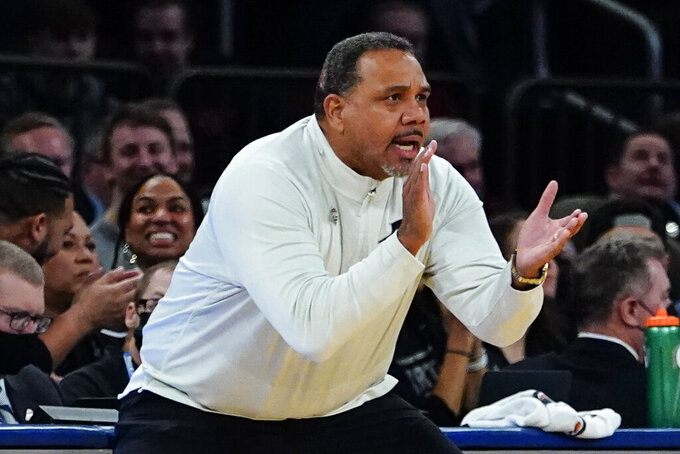 Providence head coach Ed Cooley claps for his players during the first half of an NCAA college basketball game against Butler at the Big East basketball tournament Thursday, March 10, 2022, in New York. (AP Photo/Frank Franklin II)

PROVIDENCE, R.I. (AP) — With his team on the verge accomplishing something that had never been done in Providence basketball history last month, Ed Cooley allowed himself to get lost in the moment.

The Friars were comfortably in front of Creighton, and there was about a minute to play before they could officially celebrate the school’s first regular-season Big East Conference title. Cooley suddenly was a kid again.

“I took a deep breath and then when the game was over, I took a step aside — I wasn’t Coach Cooley, I was Ed,” the Providence native said. “Ed was the kid that used to sneak into the Dunkin’ Donuts Center. Ed was the kid that, whoever was a minority, would go in the back door, I would try to ask them if I can go in with them to be their nephew, their son, or somebody. It was a surreal moment with respect to me being the coach of Providence College. ... It was a real emotion.”

It’s that kind of reflection that Cooley, the Big East Coach of the Year, will carry with him as the No. 13 Friars (25-5) enter the NCAA Tournament as the Midwest Region’s No. 4 seed — the highest in program history — and prepare to take on 13th-seeded South Dakota State (30-4) on Thursday.

Providence is back in the tourney for the first time since 2018 and is a sleeper pick to make a deep March Madness run.

But for Cooley, now in his 11th season at Providence following five years at Fairfield, it’s simply an opportunity to add to what he says has always felt has been an improbable path here.

That’s because the kind of longevity Cooley has had remains a rarity in college basketball’s top tier. Only 18 of the 75 coaches at schools in the Power Five — plus Big East — conferences have been at their current programs for at least 10 years.

Cooley enters his sixth NCAA Tournament as part of an even smaller group as one of just three coaches of color (joining Florida State’s Leonard Hamilton and Miami’s Jim Larranaga) to lead Power Five schools for at least a decade.

It’s not something Cooley takes for granted, especially since he began his journey being talked out of a job as a high school history professor in 1996 to take a post as an assistant on Al Skinner’s staff at the University of Rhode Island.

“If you grew up the way I grew up and I could actually sit here and talk to you — you have no idea,” Cooley said after notching his 300th career win earlier this season. “The percentages say you’re not supposed to be sitting here. Zero.”

He believes the secret sauce for Cooley at Providence has been a combination of “loving where he's at” and the administration giving him the space to grow the program his way.

“This is America, you have to be successful first and foremost,” Skinner said. "But you also want to be in an environment where you have that support. … It has allowed him and the university to flourish because of that understanding."

Picked seventh in the Big East's preseason poll, Cooley has notched his sixth, 20-win season in Providence with a veteran roster full of underdogs. His starting five features four graduate players (Nate Watson, Al Durham, Noah Horchler, Justin Minaya) and a senior (A.J. Reeves) — none of whom who average more than 14 points per game.

The group has also been tested in close games, boasting an 11-2 record in games decided by five or fewer points.

Watson, who likely has the best chance to play in the NBA, said the team’s success has validated his decision to return for a fifth season.

“I spoke it into existence last year,” Watson said. “I came back for reason, and that was to cut down nets and make it to the NCAA Tournament. That’s what we did."

Reeves points to the chemistry they've shared since early in the season despite having to integrate Durham and Minaya (South Carolina transfer) into the mix.

“It just felt like we were around each other for a long time. We never lost that beat,” Reeves said.

No matter what happens over the next three weeks, Cooley is thankful to continue the ride he’s been on.

“The fact that I’ve been a head coach for 16 years, I thought I’d get fired after the first game. Honest to God. I didn’t know what the hell I was doing,” Cooley said. “Over a period of time, you get lucky. You come home and they give you a chance to do something special in your backyard. This (stuff) is real, man.”

Asked about what he attributes to his staying power to, Cooley got emotional.

“Everybody worries about when our next win is. I’m just happy to go to practice tomorrow, inspire young men to be the best that they can be and one day, too, people that didn’t believe in them they can live the dream beyond their belief,” he said. “The fact that I’m here and you asked me that question — you couldn’t ask me that question 25, 26 years ago. I would said, man, I’m just trying to make it through the day.”