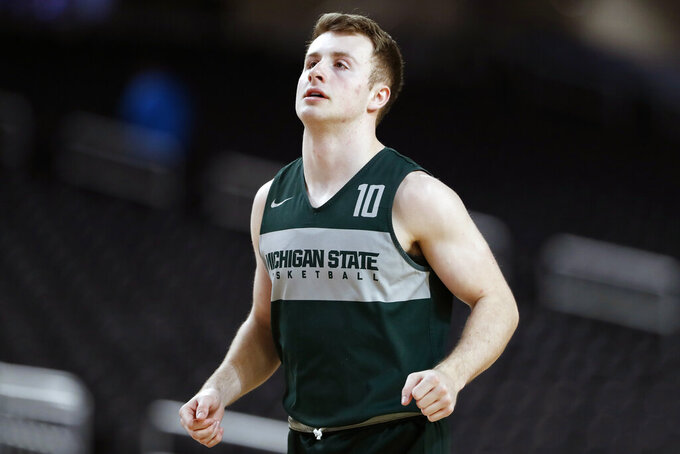 FILE - In this April 5, 2019, file photo, Michigan State guard Jack Hoiberg runs on the court during a practice session for the semifinals of the Final Four NCAA college basketball tournament in Minneapolis. Fred and Jack Hoiberg will be on opposite benches when Nebraska hosts Michigan State on Thursday night, Feb. 20, 2020. Fred is in his first year as the Cornhuskers' coach, and his son Jack is a reserve guard for the Spartans. (AP Photo/Jeff Roberson, File)

LINCOLN, Neb. (AP) — Carol Hoiberg has a wardrobe decision to make before she heads out the door for the Michigan State-Nebraska game Thursday night.

As the wife of Nebraska first-year coach Fred Hoiberg, she should wear red.

As the mom of Michigan State sophomore guard Jack Hoiberg, she should wear green.

As for themselves, Fred and Jack aren't exactly sure how they feel about the matchup they knew was coming when Fred was hired last spring and Jack decided to stay with the Spartans.

"It’s definitely weird,” Jack told reporters in East Lansing, Michigan. “Can’t say I’ve ever experienced anything like it. I’ll be able to tell you more about it after the game. But, yeah, just going to be a different thing for sure. A lot of emotions, but it’ll be fun, too.”

Jack was invited by Spartans coach Tom Izzo to walk on in 2017 after he averaged 15 points per game as a senior at Hinsdale (Illinois) Central, the school he attended while Fred was head coach of the Chicago Bulls. He's become a key member of the Spartans' scout team. That means most of his work comes in practice and involves imitating the point guard of the next opponent to prepare Spartans star Cassius Winston.

“Jack takes a lot of pride in pushing Cassius,” Fred said. “He'll send me his film clips. He was (Purdue's) Carsen Edwards last year and he was just going off. He's a big part of that thing and I know Izzo really appreciates what Jack brings to the program, and those players do as well.”

Fred has built a close relationship with Izzo. After the Bulls fired Hoiberg, he made frequent visits to the Spartans' basketball office so he could stay close to the game. He said exchanging ideas and drawing up plays with Izzo and observing how the program operates was some of the best-spent time of his career.

The Hoiberg family's discussion about Jack possibly transferring last spring was short. Hoiberg said his son loves where he is and reveled in being part of the Spartans' run to the Final Four last year.

“Going into this (season), he thought he might have a chance to get out there some,” he said. “To play on the preseason No. 1 team in the country, to stay a part of that was very important for him.”

His cheering section will include both sets of grandparents, aunts and uncles, and twin brothers Sam and Charlie. His sister Paige lives in Chicago.

Asked about the scouting report on Jack, Fred smiled and said, “He's quick; got his dad's quickness and his mom's ability to shoot. So he's a pretty complete player.”