Hokies say Outlaw to play vs. Duke after marijuana arrest 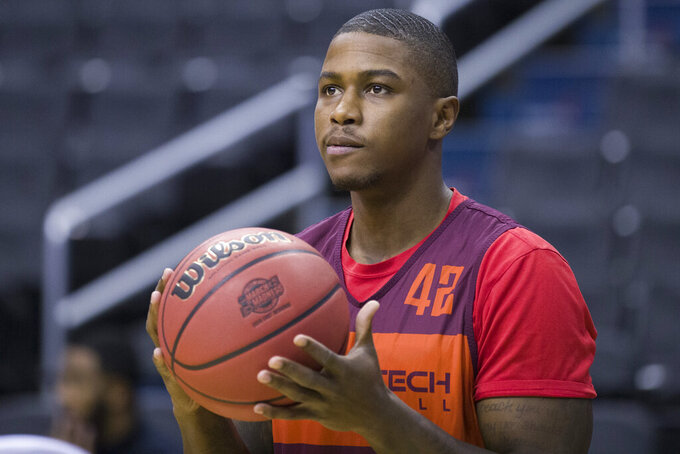 WASHINGTON (AP) — Virginia Tech coach Buzz Williams clarified the circumstances surrounding the arrest of swingman Ty Outlaw and said he expects the sixth-year senior to play against top-seeded Duke in the NCAA Tournament on Friday.

Outlaw was charged with possession of marijuana last week stemming from an incident at his residence while he was with the team in in San Jose, California, for the first two rounds of the tournament. Williams said the team learned of Outlaw's arrest Monday after returning and that Outlaw took a drug test from an outside agency that came back negative.

"Ty's handled everything perfect," Williams said Thursday after practice. "He's been transparent not only with me but with all the authorities involved. And I think it will play itself out. And maybe there should be an apology. Maybe not. Maybe that's just me being overprotective. But I think we've handled it perfectly. And we'll let the process play itself out."

Outlaw was charged with misdemeanor marijuana possession March 21. Montgomery County Commonwealth's Attorney Mary Pettitt said she believed the warrant was obtained on March 25 and not served until March 26.

Outlaw said he immediately discussed the situation with Williams. Outlaw said he did what was asked of him and never thought he wouldn't play.

"Not me, personally," Outlaw said. "I'm sure everybody else outside the program might have thought that. But that's the reason why we followed protocols and the reason why I trust in my coaching staff and Buzz Williams."

Outlaw started and had 10 points on March 24 when the fourth-seeded Hokies beat Liberty to reach the Sweet 16. He is among the top 3-point shooters in the nation at 45.6 percent.

"He's a big piece of our team — a veteran guy, great on both ends of the floor, extends the floor for us, really tenacious rebounder," forward Kerry Blackshear said. "He's somebody that you want to be out there fighting with you."