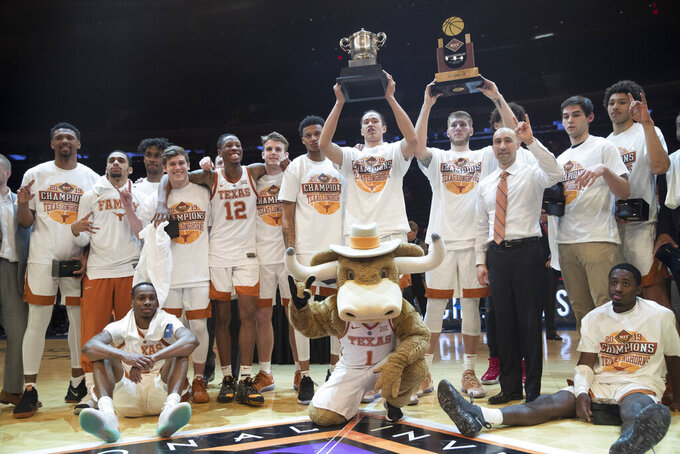 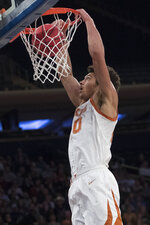 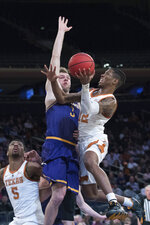 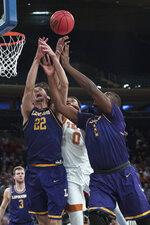 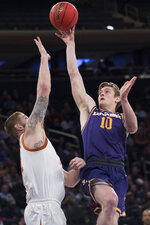 NEW YORK (AP) — Texas can hook its horns to an NIT championship.

Dylan Osetkowski had 19 points and 11 rebounds to lead Texas to the NIT championship with an 81-66 win over Lipscomb on Thursday night at Madison Square Garden.

"It's great to win a championship," coach Shaka Smart said.

The Longhorns (21-16) beat South Dakota State, Xavier, Colorado and TCU to reach the final, and survived a few late shots at the lead to win their first NIT title since 1978.

Smart, just 71-66 in four seasons with the Longhorns, got Texas to cut down the nets the same time he is reportedly on the short list of candidates to take the UCLA vacancy. Texas has not won an NCAA Tournament game under Smart and few Texas fans would weep if he left for the Bruins.

Texas fans at the Garden enjoyed the title and held up the "hook em" hand gesture as the final seconds ticked off.

Smart was doused with water in the locker room and had a towel with him as he walked to a press conference.

Jase Febres held off the pesky Bisons — don't call it a comb-back — with 3s in the second half that extended the lead to 13 points each time and kept the Longhorns firmly in charge. He finished with 16 points and Kerwin Roach II had 16.

Smart shared a moment with the troubled Roach on the court, an emotional time for a senior in his final game who has been suspended three times over his career. Roach was named the NIT's most outstanding player.

"He's had some phenomenal moments," Smart said. "I don't think he thought he'd be in college this long."

Long enough to go out a champion.

Texas won in front of about 3,000 spectators, and not one sitting above the lower bowl.

Penn State about packed MSG last year, in large part because of a substantial alumni base and rapper Flavor Flav in the house rooting on his cousin.

Well, there were a few hundred fans in burnt orange and that was about it.

So why come to this game?

Hours after the Mets won their home opener against the Washington Nationals, the train hub at Penn Station was packed with fans in Mets jerseys. Some even decided to make it a day-night doubleheader and hit MSG.

There was a small group that had made NIT games a tradition for the last 10 years. In a StubHub era in which tickets are grossly inflated from their face value cost, one fan said there wasn't anywhere else u can sit in the front row and watch basketball for a reasonable price.

StubHub had tickets in the prime 100 level going for $11 bucks 24 hours before tip — which is at least cheaper than a concession stand burger. When one fan yawned toward the end of the first half, a security guard chirped, "it's too early for that."

Osetkowski hit three 3s for 15 points in the first half and the Longhorns raced out to a 41-27 lead. The Longhorns will take their shorn nets back to Texas — with Smart's fate yet to be determined.

Garrison Mathews, named an Associated Press All-America honorable mention, scored 15 points for the Bisons (29-8). He made all 10 free throws but missed 8 of 10 shots from the floor. With their best player in a funk, Lipscomb was doomed.

"They took Garrison for the large part out of the game," Casey Alexander said. "The only thing to be sad about is that it's over."