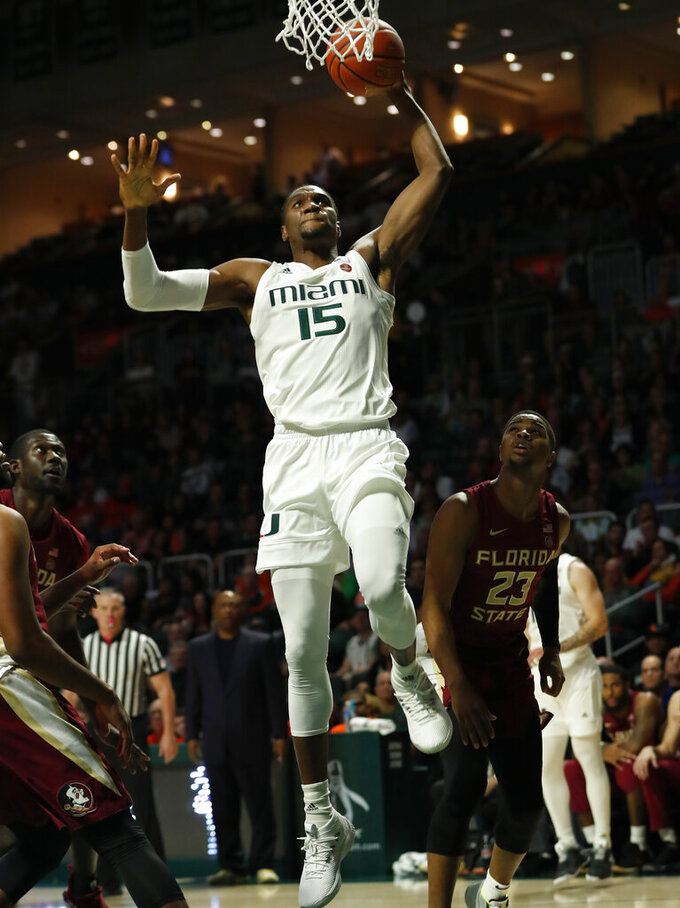 FILE - In this Jan. 27, 2019, file photo, Miami center Ebuka Izundu (15) dunks the ball during the first half of an NCAA college basketball game against Florida State, in Coral Gables, Fla. The mother of Miami Hurricanes senior center Ebuka Izundu is flying from her home in Nigeria to see him play a college game for the first time. Emma Izundu will attend Tuesday’s, March 5, 2019, game against Pittsburgh, the final home game of her son’s four-year Miami career.(AP Photo/Wilfredo Lee, File)

MIAMI (AP) — Miami Hurricanes center Ebuka Izundu says he's trying to use his influence to secure a seat behind the bench for his mother, who is visiting from Nigeria, in his career home finale.

Ifeoma Izundu will get her first chance to see her son play in a basketball game when Miami hosts Pittsburgh on Tuesday night.

"She has always heard good things about me, but she has never seen what I actually do," Izundu said Monday. "So it's going to be really exciting."

Izundu said it has been more than 18 months since he saw his mother. The reunion will be even more poignant because Izundu's father died last summer and never saw him play in a game.

The 6-foot-10 Izundu, a native of Lagos, started playing basketball in 2011 and moved to the United States in 2013. He played in high school in Charlotte, North Carolina, before enrolling at Miami.

Izundu said he and his mother talk on the phone every week. She arrived in the United States three weeks ago, has been staying with Izundu's sister in Houston and plans to return to Nigeria next week.

"I always planned for her to come my senior year," Izundu said. "My family and my high school coach made it work out."

Izundu hopes to play professionally next season. He is averaging 10.9 points and 8.6 rebounds.