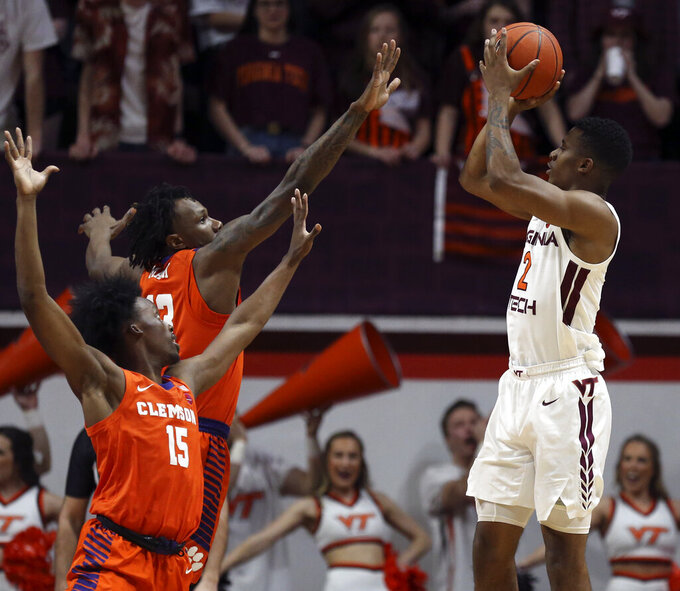 BLACKSBURG, Va. (AP) — Virginia Tech coach Mike Young gave a simple explanation for why his team played much better Wednesday night than it had in the past five weeks when it had lost nine of the past 10 games.

“When that thing goes in the basket, the game is a heckuva lot easier,” Young said.

P.J. Horne scored 17 points and the Hokies had their second-best shooting performance of the season en route to a 70-58 victory over Clemson.

Horne connected on 6 of 10 from the floor for Virginia Tech (16-14, 7-12 Atlantic Coast Conference), which shot better than 50% for the first time in an ACC game this season and snapped a four-game losing streak. The Hokies also held Clemson to 35.1% (20 of 57) from the floor in playing arguably their most complete ACC game of the season.

“I’m proud of our team,” Young said. “We’ve battled through some things and stayed the course and found a way to get out of here in our home finale. Proud of our bunch.”

Horne tied a career high with four 3-pointers, and Tyrece Radford added 16 points on 7-of-8 shooting for Virginia Tech, which shot 54.2% from the floor (26 of 48) and hit 12 3-pointers. Only their 56.5% shooting night against Delaware State in November has been better than Wednesday’s performance – one in which the Hokies made 16 of 27 from the floor in the second half to pull away.

“Just ball movement and screening and making sure we’re taking great shots instead of good shots,” Horne said of the reasoning behind the success. “Coach says to take great shots, not good ones, and we did that.”

“When P.J. Horne has the ability to step out and make multiple 3’s, that makes it really, really tricky to guard,” Young said. “To make four, that’s really difficult, and I rank Clemson in the top three or four, maybe top two, in our league in halfcourt defense.”

Tevin Mack was the lone Clemson player in double figures, scoring 12 points. The Tigers (15-14, 9-10) had won four of their past five games coming into this game.

Virginia Tech broke open a close game midway through the second half. Clemson grabbed a 42-41 lead on a field goal by Mack with 13:59 remaining, but the Hokies responded with a 13-0 run. Hunter Cattoor and Jalen Cone capped the run, with Cattoor scoring on a breakaway dunk and a 3-pointer, and Cone burying a 3-pointer from the wing, giving a 54-42 lead. Clemson never recovered.

“We played very poorly,” Clemson coach Brad Brownell said. “Certainly some of that is because of the way they played. Some of it is because our energy level, for whatever reason, was very low. Communication was very poor. For whatever reason, mentally, we weren’t in the game, and we didn’t recover. I thought we played soft on both ends. This is one of our poorer performances of the season.”

Clemson: Though the Tigers have quality wins over Duke, Louisville and Florida State – three teams currently ranked in the top 12 of The Associated Press poll – their hopes of an NCAA Tournament bid probably came to an end with the loss to the Hokies. They settled too often for 3-pointers, making just 9 of 35 attempts, instead of capitalizing on Virginia Tech’s lack of size and that led to their downfall.

Virginia Tech: In addition to shooting well, the Hokies out-rebounded an ACC opponent for just the third time this season – doing so twice against the Tigers. Winning that battle also played a key role in their winning, and despite their late-season skid, the Hokies still have a shot at a winning season and a National Invitational Tournament berth. That would be an incredible accomplishment for first-year coach Mike Young, who starts three freshmen and plays six regularly.

Virginia Tech desperately wants to get a first-round bye for next week’s ACC tournament and is in position to do that. It would be a small accomplishment for a team picked to finish 14th out of 15 teams in the league’s preseason poll.

“I think it would be a pretty nice feather in our team’s hat to get off that Tuesday game (the day of the first round),” Young said. “If we’ve got to play, let’s go load it up and fight. But to get off of that and play Wednesday, that would be a real reward for a team that’s hung in there together and continued to improve through the year.”

Clemson currently sits in a tie for seventh place in the league standings.

Clemson: The Tigers play at home against Georgia Tech on Friday.

Virginia Tech: The Hokies play at Notre Dame on Saturday.