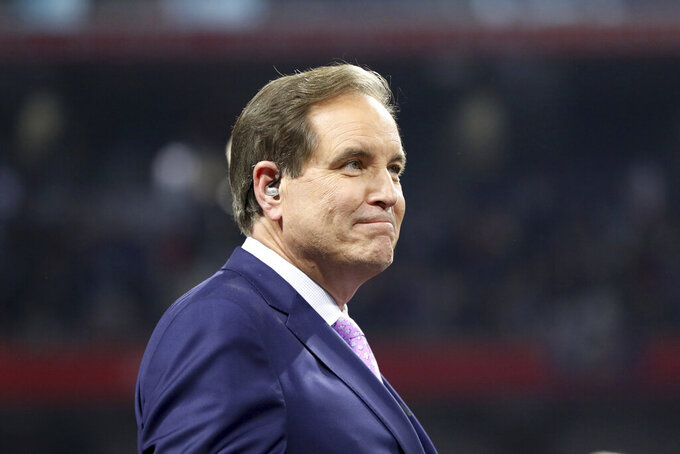 FILE - Announcer Jim Nantz is seen after NFL Super Bowl 53, Sunday, Feb. 3, 2019 in Atlanta. Jim Nantz's familiar introduction of “Hello friends” will continue to be heard on CBS for many years to come. Nantz and CBS Sports reached agreement on a new deal Thursday, March 25, 2021. The deal was first reported by the “Sports Business Journal”(AP Photo/Gregory Payan, file)

Jim Nantz has called last-second shots for an NCAA championship, undefeated teams falling short in the semifinals and unlikely underdogs making the Final Four. But as Nantz prepares to call his 30th Final Four for CBS, he will do something this weekend that seemed improbable for a long time — watch his alma mater on the big stage again.

Nantz, Bill Raftery and Grant Hill will call the Houston-Baylor game, the first semifinal scheduled Saturday. Nantz graduated from the University of Houston and got his start in broadcasting through the basketball program. He was the public address announcer during Cougars home games and then hosted the weekly highlights show of Hall of Fame coach Guy Lewis in the early 1980s.

“Having Houston in the Final Four is a very big deal to me. The basketball program's been an important part of my life,” Nantz said. “It has been a long road back and I'm thrilled. It was a lot of lean years since my days of being around Phi Slama Jama.”

Nantz left Houston in 1982 to become a weekend sports anchor in Salt Lake City but he made it to the 1983 championship game where Houston lost to North Carolina on a last-second shot.

His ties to the Cougars still run deep. He teamed up with former roommates Fred Couples and Blaine McCallister to create the program's first endowed scholarship. This year's recipient of the Three Amigos scholarship is sophomore guard Marcus Sasser, who is second on the team in scoring at 13.5 points per game.

Nantz has vowed to be impartial during Saturday's game, saying there will be “equal love” for Baylor. The second game will match undefeated Gonzaga against UCLA.

Houston's journey to the Final Four isn't the only good news Nantz has had to soak in over the past couple weeks. He celebrated his mom's 90th birthday earlier this week along with his contract extension with CBS that was announced last week.

Nantz, whose contract was set to expire later this spring, and CBS Sports chairman Sean McManus said negotiations were not contentious. Nantz has been with CBS since 1985 and called his first Final Four six years later.

“I wanted to be a one-network guy. I could not be more grateful to be able to do the events that I wanted to do,” he said.

McManus said there was never a Plan B if Nantz had left because it wasn't going to be a possibility.

“Jim is going to be with us, thank heavens, for many, many years to come,” McManus said. “It was just a matter of time and getting it done, but our interests are aligned.”

Even though the coronavirus shut down sports for nearly three months last year, Nantz might be the most-traveled announcer since sports returned. He has called 14 golf tournaments (only one remotely), 21 football games, including this year's Super Bowl, three games during the Big Ten basketball tournament and nine NCAA games heading into the Final Four. Nantz's base of operations for the past three-plus weeks has been Indianapolis, where all the men's NCAA Tournament games have been played.

Nantz said he has been extremely cautious in observing CBS health and safety protocols, including being primarily confined to the hotel before and after events. That has also made the usual challenges of doing the Final Four and Masters back-to-back even more special this year.

“It’s been a lot of time of isolation. I think you can go anywhere online to read stories about how people dealt with the isolation, it’s not easy," he said. "But the real joy is actually when you have a chance to get to the arena, you get to see your teammates, and you get to put some great television on here.

“I’ve gotten so accustomed to having this remarkable run through March and into April with the Masters and we all know the last year there was a huge void in all of our lives. There was no live sports programming at this time last year, so I’ve definitely appreciated it a whole lot more.”