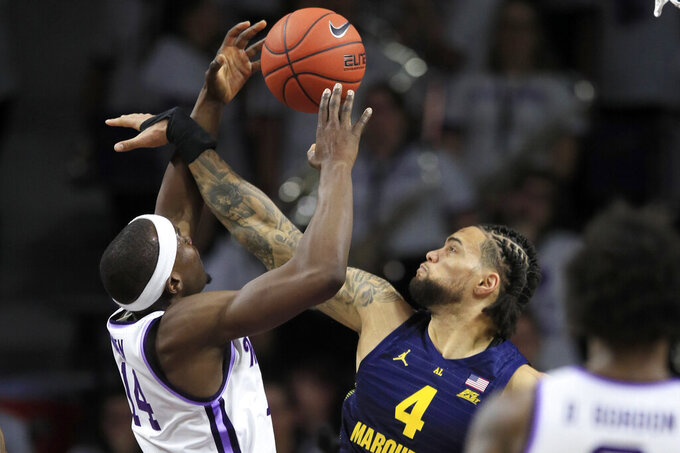 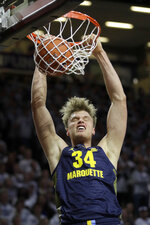 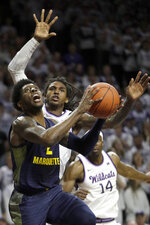 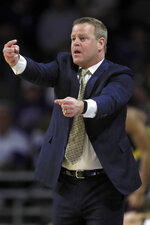 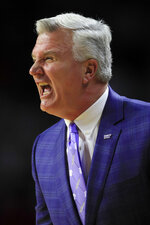 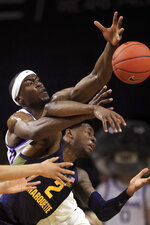 MANHATTAN, Kan. (AP) — Markus Howard is the name everyone knows for Marquette this season, but it was a few role players who made the difference on Saturday night.

“Everyone we put in made winning plays,” Marquette coach Steve Wojciechowski said. “When Kansas State was making their runs, Jamal came up with numerous hustle plays. Our bench was a huge part of this win.”

Howard came into the game listed as questionable but played 28 minutes and scored 19 points after not playing in their last game against Jacksonville on Wednesday night.

“The emphasis they put on Markus wasn’t a surprise,” Wojciechowski said. “Remember, that is the first contact Markus has had in five days. We didn’t even know he was going to be cleared today until this morning.”

The Golden Eagles (7-2) held off a comeback attempt by the Wildcats after leading by as many as 14 in the second half.

“This was as tough as we’ve played up to this point of the season,” Wojciechowski said. “We needed all of it to beat a good Kansas State team.”

“This is all new for us,” head coach Bruce Weber said. “There’s new roles and I wish it was easier, but it hasn’t come as easy as we all had hoped and I just hope we make some strides.”

The Golden Eagles hit 12 3’s and shot 42% from the field but committed 18 turnovers, which allowed Kansas State to hang around.

Kansas State made 5-of-12 free throws and shot 26% from the field before halftime.

“The problem was we shouldn’t have been down 13 at halftime,” Weber said. “Now you have to fight back and use all that energy. They made a lot of big shots.”

Marquette has a nice break before taking on Grambling State in 10 days. They don’t face another Power Five school until conference play begins in January.

“What a great home court and atmosphere for college basketball,” Wojciechowski said. “We feel fortunate to come out of here with a win.”

Marquette: The Golden Eagles hit a big shot every time they needed one. Howard gets most of the attention, but there are many good shooters on this team.

Kansas State: The Wildcats were tested at home for the first time this season. They need to be much better at the free throw line if they want to win close games.

Marquette has 10 days off before hosting Grambling State on Dec. 17.