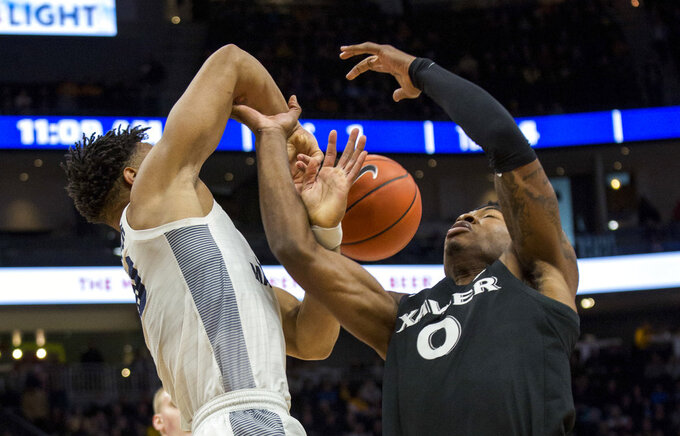 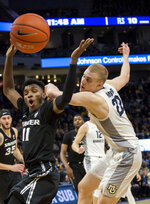 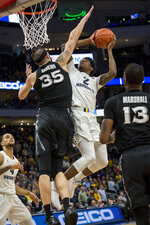 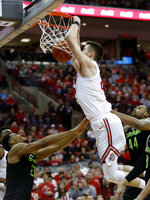 MILWAUKEE (AP) — Sacar Anim made the most of Markus Howard's presence for Marquette.

Anim scored 14 of his 20 points in the first half, and the No. 16 Golden Eagles remained unbeaten at home with a 70-52 victory over Xavier on Sunday.

Anim was 9 for 14 from the field. Howard had 26 points and eight assists, and Joey Hauser added 18 points.

"Obviously, every team is going to game plan to stop Markus," said Anim, who entered averaging 6.4 points. "Every time I know I have the opportunity to be aggressive, especially if they're doubling home or they're going to be extra aware of him, I just have to go out there and be aggressive and just attack."

"I'm proud of my team, especially on the defensive end," coach Steve Wojciechowski said. "Obviously we can play a lot better offensively. But, winning with defense is OK."

The Musketeers were just 1 of 14 from 3-point range and managed just four assists.

"I thought we had some open shots, and I though we also passed up some open shots," first-year coach Travis Steele said. "Our guys weren't ready to shoot the ball. Marquette was really trying to keep it tight and really kind of going all in our drives, and we're obviously a driving team."

Marquette opened a 16-point lead midway through the first half. The Golden Eagles led 35-26 at the break and then began the second half with a 13-2 run.

The Musketeers shot just 31.5 percent (17 for 54) from the field. They made just of one of their first 11 shots to open the second half.

Howard, Amin and Hauser shot a combined 25 of 45, while the rest of the Golden Eagles were 2 for 18.

Marquette had won eight straight, including three over ranked opponents, before the loss at St. John's.

"We had a lot of things to work on after that first game," Hauser said. "Coming off Christmas break, maybe we got a little too big-headed about it. I think we lost our competitive edge and that's really what we worked on all week. Competing every play, competing on the defensive end, as well, when things aren't going well on the offensive end.

Xavier: The Musketeers are searching for consistency under Steele. Xavier won its first two games, and then lost four straight. The Musketeers then won four in a row, but they have dropped four of their last seven now.

Marquette: To challenge in the Big East, the Golden Eagles need to figure out how to win on the road. In addition to a neutral-court loss to then-No. 2 Kansas in the NIT Season Tip-Off, Marquette has lost big in its only two road games, 96-73 at Indiana in mid-November; then an 89-69 loss at St. John's on Jan. 1.

Xavier opened with the 6-foot-7 Marshall on the 5-11 Howard, who entered as the Big East's leading scorer with a pair of 45-point games already this season.

Marquette is at Creighton on Wednesday.