Howard scores 30 as No. 23 Marquette routs SJU to snap skid 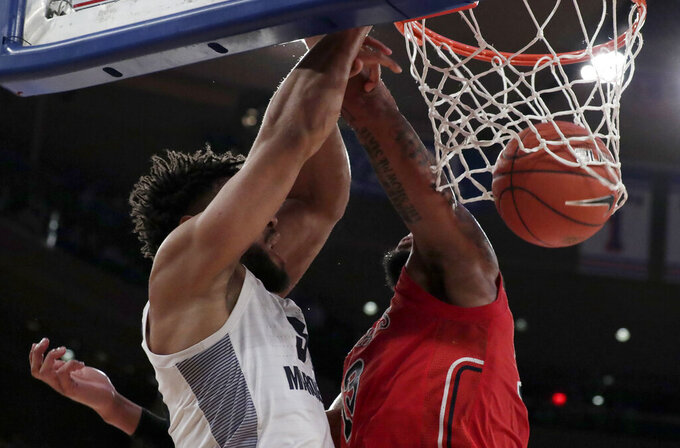 NEW YORK (AP) — Just when it seemed No. 23 Marquette was about to let a fifth straight game slip away, Markus Howard showed everyone why he was the Big East player of the year.

Howard scored 12 of his 30 points during a game-breaking 23-2 second-half run, and the Golden Eagles routed St. John's 86-54 in the conference quarterfinals Thursday night to stop their four-game slide.

It was the most points scored by a Marquette player in the Big East Tournament, breaking the old mark of 28 set by Jerel McNeal against Notre Dame in 2008.

"Markus is Big East player of the year for a reason, and it's not just because he can score," coach Steve Wojciechowski said. "You're talking about a complete player, who every team's game plan is geared to stop him. What he's been able to do this year is fantastic. It's hard when you command that much attention from a defense to make a great decision every time, especially when the ball is in your hand a lot, but he's done that more times than not."

Second-seeded Marquette (24-8) advanced to its first Big East semifinal since 2010. It will face No. 3 seed Seton Hall, a 73-57 winner over No. 6 seed Georgetown in the late quarterfinal at Madison Square Garden. The Golden Eagles and Pirates split two meetings during the regular season.

"All week we have been telling him (Howard) to just be yourself and don't overthink it and play," said teammate Sam Hauser, who had 10 points, seven rebounds and five assists. "He went out there and played and made a lot of great plays for himself and others. When all the attention is on him, he knows when to kick and pass. He showed it tonight."

Howard was never needed more than when St. John's (21-12) closed a 12-point halftime deficit to 43-37 on a jam by Justin Simon, who led the Red Storm with 14 points and eight rebounds.

That had Madison Square Garden rocking with 14:57 left and prompted Wojciechowski to take a 30-second timeout.

Whatever he said, it worked — although the coach downplayed the timeout.

Howard then took over in reaching 30 points for the 10th time this season. He sandwiched two layups around three free throws to push the lead to 50-37. After Shamorie Ponds scored on a drive, Joey Hauser scored on one of his own. Howard hit a wild, off-balance layup and a 3-pointer, and Ed Morrow had a dunk to make 59-39.

Marquette scored the next seven points to open a 66-39 lead, ending a 16-point run.

"I just tried to do whatever the game presented and at the time, there was a need to create," said Howard, who was 8 of 15 from the field. "My teammates give me supreme confidence and that makes it really easy to do what I do."

Fellow guard Sacar Anim added 13 points as Marquette handed seventh-seeded St. John's its worst loss of the season in beating the Red Storm for the first time in three tries this year.

The loss leaves St. John's on the bubble for the NCAA Tournament, with five losses in its last seven games.

St. John's: Will find out Sunday where it plays next. The Red Storm, who defeated DePaul in the opening round Wednesday night, are hoping for their first NCAA Tournament berth in Chris Mullin's four years as coach. "I definitely believe we are going to be in the tournament," Ponds said.

Marquette: Going to the NCAAs, but still wants to end defending national champion Villanova's run of back-to-back titles in this event.