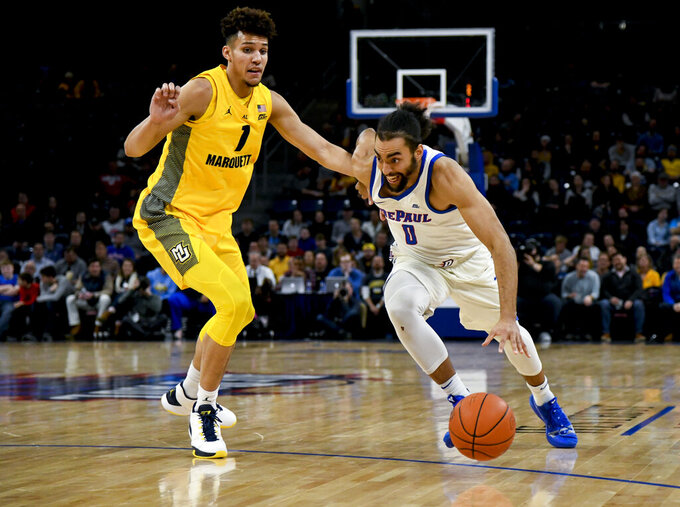 CHICAGO (AP) — Markus Howard scored almost at will. Sam Hauser and Sacar Anim also made a couple of key plays, and Ed Morrow delivered a solid performance in his hometown.

It was another nice night for No. 10 Marquette up until Hauser was poked in his right eye in the second half of Tuesday's 92-73 victory over DePaul, sidelining the valuable swingman for the rest of the game.

"Unfortunately, he got a really good shot to the eye," coach Steve Wojciechowski said. "We just need to get him checked out. I don't have any updates other than we didn't feel comfortable putting him back in the game."

Hauser went to the locker room after he got hit with 6:51 left, but he returned to the bench to watch the final minute with his excited teammates. Following Marquette's second straight win, he said he was OK, but was still having trouble seeing out of his eye and was going to get it examined.

The 6-foot-8 Hauser finished with 17 points, four rebounds and four assists. Howard called the junior "one of the best players in the country."

"He does not get the credit that he deserves," Howard said. "He does so many things for our team."

One reason why Hauser doesn't get much attention is the dominant play of Howard, who scored 36 points on 12-for-21 shooting. He has scored at least 30 points in four of his last five games.

"I thought our guys were locked in the entire game," Wojciechowski said.

"To say the least, today we ran into a buzz saw," coach Dave Leitao said.

Strus got DePaul within one when he converted a layup with 5:41 left in the first half. But Marquette then pulled away for good, going on an 11-0 run led by the shifty Howard.

The junior guard made two foul shots and a layup to increase the Golden Eagles' lead to 39-34 with 4:46 left. After Jaylen Butz missed two foul shots for DePaul, Jamal Cain hit a 3-pointer from the corner to make it 46-34 with 1:23 remaining.

It was more of the same in the second half as Marquette continued to work the ball around for open looks. Cain and Anim scored before Morrow made a foul shot to give the Eagles a 69-49 lead with 13:40 to go.

Howard is up to 1,744 career points at Marquette, passing Butch Lee for fifth on the school list. Next up is Dominic James with 1,749 points.

"When I think about that, I just think of how great of teammates I have," Howard said. "I wouldn't be able to even be on that list if it weren't for my teammates, how selfless they are."

Marquette: Howard is a terrific scorer, but Hauser also is quite an asset for the Golden Eagles with his ability to start a break off the glass. He grabbed a defensive rebound in the first half, dribbled up the court and drained a 3-pointer to make it 29-21 with 11:14 left.

DePaul: Reed helped the Blue Demons to a 42-31 rebounding advantage, but they were picked apart on defense.

Marquette is off for a week before hosting Butler on Feb. 20. The Golden Eagles beat the Bulldogs 76-58 in their first meeting of the season on Jan. 30.

DePaul visits Butler on Saturday night. The Blue Demons lost 87-69 to the Bulldogs on Jan. 16.