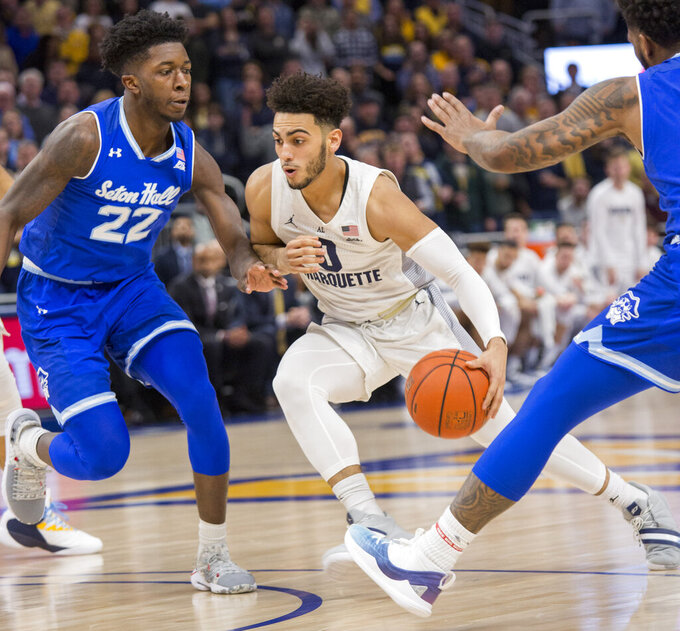 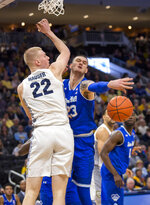 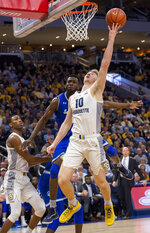 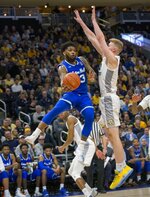 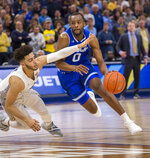 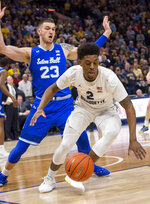 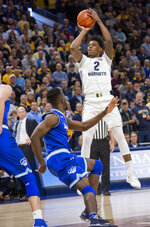 MILWAUKEE (AP) — Markus Howard got his points, and unheralded Theo John did just about everything else Marquette needed.

Howard scored 26 points, John had a double-double that included three crucial free throws down the stretch and the 21st-ranked Golden Eagles staved off a second-half rally to beat Seton Hall 70-66 on Saturday.

John, a sophomore forward who averages about 17 minutes per game, was forced to play a season-high 31 minutes when Ed Morrow injured an ankle. John responded with a career-high 11 rebounds, scored 10 points and blocked three shots.

John entered shooting 47 percent from the foul line but hit two free throws to put Marquette up 64-63 with 2:12 remaining. He then hit the second of two free throws with seven seconds left to give the Golden Eagles a 68-65 lead.

"Theo stepped up. He hit huge pressure free throws," Marquette coach Steve Wojciechowski said. "For him to make those free throws in that game situation, that was absolutely huge for us."

Quincy McKnight pulled Seton Hall within 68-66 by hitting the first of two free throws with three seconds left, but Sam Hauser was fouled on the rebound and converted both free throws at the other end to keep Marquette (14-3, 3-1 Big East) undefeated in 12 home games at the new Fiserv Forum.

"I didn't want Powell to tie the game," Wojciechowski said of the decision to foul. "I think you have to go by feel on that. I don't think there should be necessarily a hard and fast rule. But when Myles Powell's on the other team, let's try to rely on our free-throw block outs. And, we did and Sam came up with a huge rebound."

Howard scored 53 points in Marquette's 106-104 overtime win at Creighton on Wednesday. He followed with 18 points in the first half Saturday, but made just 2 of 9 shots after halftime.

"I think Markus, coming off an overtime game, I think we did a little bit better job of just being a little bit more aggressive with our big guys coming up on him, just making it a little bit tougher," Willard said. "But he's a heck of a player."

The Pirates took a 52-49 lead on Taurean Thompson's lay-in with 8:34 left. Howard missed his first four shots after the break but ended Marquette's 4:23 scoreless streak with a pull-up jumper from the right side to make it 52-51.

Seton Hall: The Pirates are concluding a challenging five-game stretch with two sets of back-to-back road games sandwiched around one at home. Seton Hall defeated Xavier, then lost at DePaul before edging Butler at home 76-75. After Marquette, the Pirates are at Providence. Last year, the Pirates went 3-2 in a similar stretch.

Marquette: The Golden Eagles are looking for more consistency on the road. Marquette was 0-2 in true road games and 1-1 in the NIT Season Tip-Off tournament before Wednesday's 106-104 overtime victory at Creighton.

Marquette unior forward Ed Morrow played 6 ½ minutes before injuring his ankle. "Ed landed on someone's ankle and his ankle swelled up pretty good," Wojciechowski said. "At this point, we don't know exactly what's wrong, but we'll figure that out as the night does on."

Hauser, a junior forward and the older brother of freshman Joey Hauser, scored his 1,000th career point on a free throw with 3:40 remaining. "I didn't even know that I got it during the game, I was told afterwards," Sam Hauser said. "It's just a cool accomplishment to have, but I'm not going to put too much into it. It's in the past now, so I'm just going to keep going."

Seton Hall is at Providence on Tuesday.

Marquette is at Georgetown on Tuesday.