Howard's first Michigan team has to replace lots of scoring 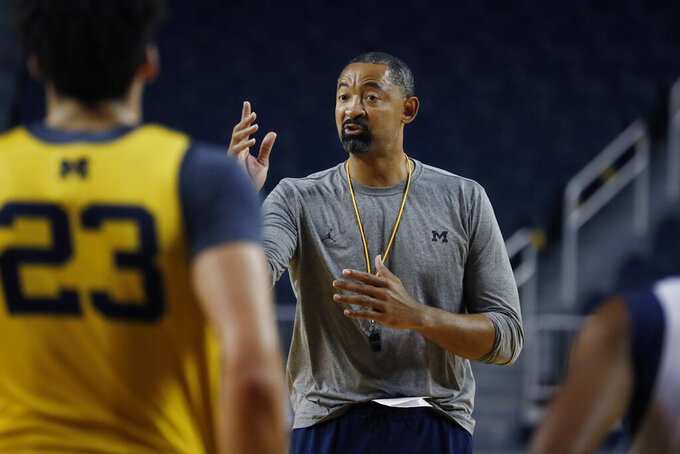 Michigan head basketball coach Juwan Howard attends an open practice, Thursday, Oct. 17, 2019, in Ann Arbor, Mich. Michigan held its men's basketball media day Thursday, another first for Howard as he prepares for his initial season at the helm. The former Fab Five star returned to his school after coach John Beilein left for the NBA this offseason. (AP Photo/Carlos Osorio)

ANN ARBOR, Mich. (AP) — Juwan Howard will have an immediate chance to put his stamp on the Michigan program.

This is no rebuilding project — not with the Wolverines coming off their third straight Sweet 16 appearance — but there has been enough turnover in Ann Arbor that it is hard to know what to expect this coming season. Michigan didn't just lose coach John Beilein, who went to the NBA and was replaced by Howard. The Wolverines also lost Iggy Brazdeikis, Jordan Poole and Charles Matthews, their top three scorers from 2018-19.

With so many ties to Beilein's successful tenure already gone, this very much feels like Howard's program now.

"It's been fun. It's been great for me, as my first time as a head coach, with all the ideas bouncing around in my head, with all the information that I've gathered, tucked away in my file, to now bring it to life," Howard said. "It's also made me lose a lot of sleep too, because my brain is always working."

If Michigan were returning more starters, perhaps the transition from Beilein to Howard would be a more gradual change, but the start of the season is full of unknowns. The Wolverines played a distinctive style under Beilein, shooting a lot of 3-pointers, spacing the floor well and keeping turnovers to a minimum. Howard takes over a clean slate of sorts, with so many key players to replace.

The staff of assistants is new as well and includes former Saint Joseph's coach Phil Martelli.

"They're all hands on deck," forward Isaiah Livers said. "They just want players to be good. They just want them to be just better than the previous year, getting that mindset of just growing each year. I can say honestly that every player has grown from last year."

Michigan will be able to lean on a couple seniors who were important members of last season's team. Point guard Zavier Simpson and center Jon Teske are both back. Simpson in particular has been a driving force behind the defensive resurgence that led the Wolverines to the Final Four in 2018 and to more success last season. The 7-foot-1 Teske averaged 9.5 points last season and blocked 75 shots. He also made 23 3-pointers.

Freshman Franz Wagner arrives amid a good deal of fanfare. He's the younger brother of former Michigan standout Moe Wagner. Franz, however, will have to wait to begin his college career. He's expected to be out at least until the latter half of November with a fractured wrist.

Howard mentioned David DeJulius, Eli Brooks and Adrien Nunez when asked about the competition at the other guard spot alongside Simpson. Brooks averaged 12.9 minutes a game last season, and DeJulius played more sparingly. Howard said Nunez is one of the best shooters on the team.

"I have a team that loves to get in the gym," Howard said. "That's what it's about."

Livers started 22 games as a freshman but mostly came off the bench last season as a sophomore. His 3-point percentage improved from 36 to 43, and he can expect plenty of opportunities in 2019-20, given how much scoring Michigan lost. Teske is the team's top returning scorer, followed by Simpson (8.8 ppg) and Livers (7.9).

The Wolverines open the season Nov. 5 against Appalachian State. Their nonconference schedule also includes Creighton on Nov. 12. They play at an event in the Bahamas in late November that includes a matchup with Iowa State and a possible meeting with No. 9 North Carolina. Michigan plays at No. 5 Louisville on Dec. 3 and starts conference play three days later against Iowa.