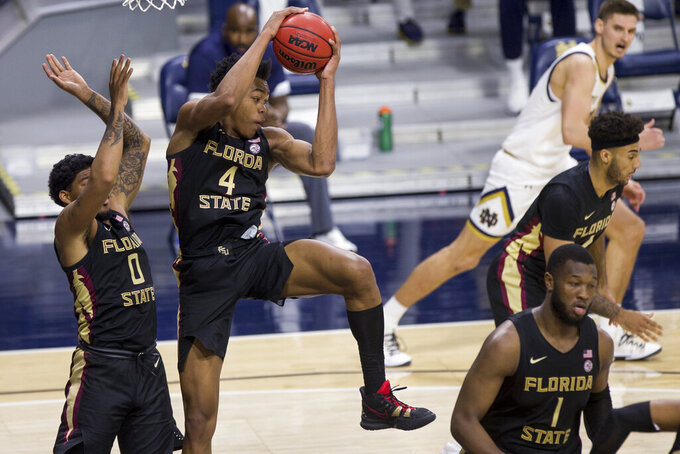 It had been a while.

The Seminoles s (15-5, 11-4 squandered a chance for a second straight Atlantic Coast Conference title, losing out on the title when No. 21 Virginia beat Louisville later Saturday to win the regular-season championship.

The Fighting Irish (10-14, 7-11) had five players score in double figures in the program's first win against a ranked team since a 67-66 victory over Wichita State in November 2017. They had dropped 28 such games in a row.

“I thought we had some edge about us to get loose balls and stick our nose in there and take charges, and that helped us,” coach Mike Brey said. “You’re not gonna really run anything pretty against an athletic, switching defense, (but) I thought we did a good job the last two days of practice talking about just opening the floor up and cutting more.”

Cormac Ryan, Nikola Djogo and Nate Laszewski had 11 points apiece for Notre Dame, which had dropped four in a row. Juwan Durham had nine points and nine rebounds.

The Fighting Irish went 28 for 34 at the free-throw line, compared to 15 for 20 for the Seminoles.

“I thought Notre Dame did a better job of being extremely aggressive and hitting the open shots and challenging our defensive discipline by making the extra pass,” Florida State coach Leonard Hamilton said. “Then at the end, they hit their free throws.”

Notre Dame led by as many as 20 on its way to a 47-31 halftime lead. Florida State closed to 74-70 on Anthony Polite's 3-pointer with 2:34 left. But Laszewski hit four foul shots down the stretch to help the Irish close it out.

Florida State: The Seminoles are comfortably in the NCAA Tournament and only fighting for seeding position as they head into the ACC Tournament.

Notre Dame: The Irish got Brey a sorely needed victory near the end of a challenging season.

Florida State got its first ACC regular-season title last year during its 29th year in the league. A repeat seemed likely entering Saturday.

“Part of the journey of our team is being in a position mentally and emotionally to handle this moment, the pressure to want to play well and win a championship,” Hamilton said. “The will of Notre Dame wanting to be successful against a Top 25 opponent, their will was a little stronger than ours today.”

Florida State: The Seminoles enter the ACC tourney as either the No. 1 or No. 2 seed, pending the outcome of Virginia’s game. Either way, FSU will have a double bye into Thursday’s quarterfinals.

Notre Dame: The Irish, as the ACC’s No. 11 seed, face 14th-seeded Wake Forest on Tuesday night.