Huggins ties Smith at 879 as No. 17 WVU beats Oklahoma State 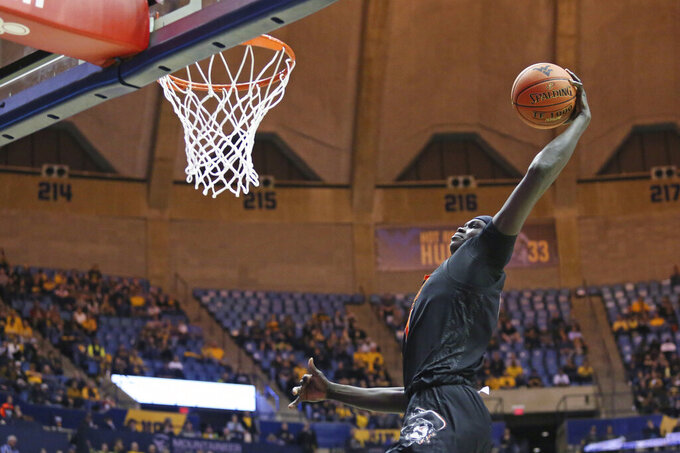 MORGANTOWN, W.Va. (AP) — West Virginia coach Bob Huggins had a better time being around North Carolina great Dean Smith than talking about tying him on the career wins list.

The 17th-ranked Mountaineers took over early in the second half to beat Oklahoma State 65-47 Tuesday night, giving Huggins his 879th victory to match Smith for sixth all-time among Division I coaches.

“I got to spend a lot of time with him," Huggins said. "Quality guy, class guy, fun guy. I just watched him from afar, a fun guy to be around.

"I don't pay attention. Those are my friends, what do I care?"

Huggins certainly cares about putting wins together, especially after a recent three-game slide that was stopped by Tuesday's second-half dominance.

Cutting down on turnovers was a big reason West Virginia (19-7, 7-6 Big 12) halted the skid, which included losses last week to top-ranked Baylor and No. 3 Kansas.

“We had three losses in a row. That's unusual, especially for us,” guard Taz Sherman said. “I feel like we’re a good enough team to not go on slumps like that, offensively and defensively.”

The Mountaineers fell behind by 10 early but got back on track with tough defense. Oklahoma State shot 17% (5 of 30) from the floor after halftime and was held to 14 points, the fewest allowed by West Virginia this season.

Sean McNeil made three free throws after getting fouled on a 3-pointer. That capped a 20-4 run to start the second half and gave the Mountaineers a 48-37 lead with 8:42 remaining.

“Obviously, it was a tale of two halves in many ways for our team," Oklahoma State coach Mike Boynton said. "West Virginia played better than us for 20 minutes for sure, maybe even the last four minutes of the first half, being perfectly honest.”

McNeil and Miles McBride scored 11 points apiece for the Mountaineers. McBride was making his first start. Oscar Tshiebwe had 15 rebounds, Derek Culver pulled down 10 off the bench and West Virginia outrebounded Oklahoma State 42-29.

West Virginia’s comeback actually started with the final shot of the first half. Jermaine Haley hit a 3-pointer from the corner on an inbounds pass as time expired. That trimmed the Mountaineers' deficit to 33-28, and they maintained the momentum the rest of the way.

Huggins inserted guards McBride and Sherman in the starting lineup to replace the 6-foot-10 Culver and guard Jordan McCabe.

“It didn't seem like it helped us much,” Huggins said. “They took away everything we wanted to do, and we didn't handle it very well.”

Despite shooting 1 of 6 and scoring two points in the first half, McBride said it was “a dream come true” to start as a freshman.

The new lineup put the Mountaineers at a size and scoring disadvantage.

“We started small and that probably wasn’t the right thing to do, in hindsight," Huggins said. "We were struggling so hard to score (previously) with playing that bigger lineup, but I thought that bigger lineup in the second half really saved us.”

Oklahoma State: The Cowboys shot 60% from the floor in the first half but went cold after that, going more than five minutes without a field goal to start the second half.

West Virginia: The Mountaineers averaged 17 turnovers during their losing streak but committed only 10 on Tuesday. Still, there's plenty of work to do to earn a high seed in the NCAA Tournament. West Virginia shot just 2 of 16 from 3-point range.

Oklahoma State heads back home to host Oklahoma on Saturday.

West Virginia plays at TCU on Saturday. The Mountaineers have dropped four straight on the road.