Hughes scores 28, leads Syracuse to 84-71 victory over BC 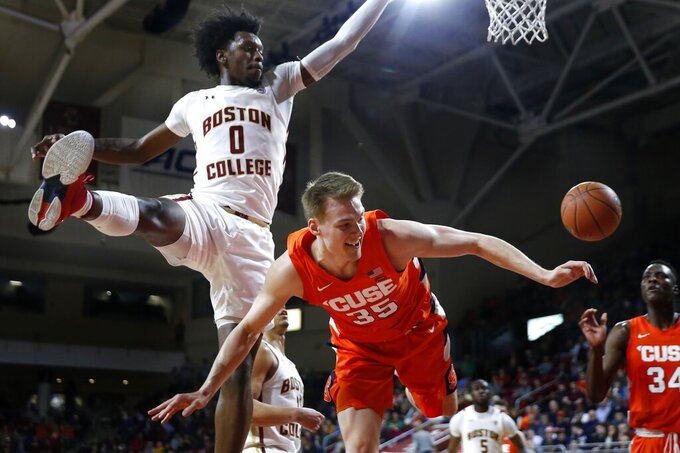 Syracuse's Buddy Boeheim (35) loses control of the ball while shooting against Boston College's CJ Felder (0) during the second half of an NCAA college basketball game, Tuesday, March, 3, 2020, in Boston. (AP Photo/Michael Dwyer)

With three of the Eagles' top six players injured, Hughes had 28 points, and Buddy Boeheim added 21 on Tuesday night to help Syracuse beat BC 84-71.

“I was just out there hoop-ing it. I wasn't thinking about it too much," said Hughes, the leading scorer in the Atlantic Coast Conference. "When I got in a rhythm, I just felt like I was going on from there.”

Losers of six of its previous nine games, Syracuse enjoyed a home court of sorts at Conte Forum, where the BC students were on spring break and the majority of the half-filled arena was rooting for the Orange.

“It felt like a home game, really," Buddy Boeheim said. "During warmups we were looking around and it felt like 90 to 10 Syracuse to Boston College fans. It was just a good feeling going into the game. We wanted to get a good lead and make sure we sealed the deal. I think that motivated us a little more to put on a good show at the end.”

Derryck Thornton scored 18 points, Jay Heath had 17 and Steffon Mitchell had 11 rebounds and 10 assists for BC (13-17, 7-12). Thornton had six and Heath had five of a school-record 19 3-pointers for the Eagles, who have lost four in a row heading into the regular-season finale against No. 7 Florida State.

It was also the most 3-pointers ever allowed by the Orange.

“Teams take a lot of threes against us anyway. They went to an extreme,” coach Jim Boeheim said. “I think they had to.”

The Eagles missed 24 of their 30 attempts from 3-point range in a 26-point loss at Syracuse on Jan. 15 — including all 14 in the first half. But on Tuesday night, they hit three of their first four at home to open an early lead before going into a slump, missing 10 of their next 12 from beyond the arc.

BC was without Jared (ankle) and Jairus (knee) Hamilton, and Nik Popovic (back), who together accounted for 28 points and 12 rebounds per game.

“Not many people have a guy to guard Elijah. He’s hard to guard,” Jim Boeheim said. "They’re missing guys, but they’ve been missing guys all year. We didn’t know who was here until the game.”

Syracuse scored zero second-chance points in the first half and 15 in the second. BC coach Jim Christian said he had to use several players for more minutes than they were used to.

“Defensively we just ran out of gas,” he said, nothing there isn't much he can do before the season finale. “You can’t regroup health.”

Syracuse: The Orange have a bye on the first day of the ACC tournament but need an extended run in the conference tourney to have any chance to return to the NCAA Tournament after last year's absence.

Boston College: With only the ranked Seminoles remaining, the Eagles are unlikely to surpass the seven conference wins that has remained a high point in Christian's six years in Chestnut Hill.

Boston College: Finish up the regular season at No. 7 Florida State on Saturday.