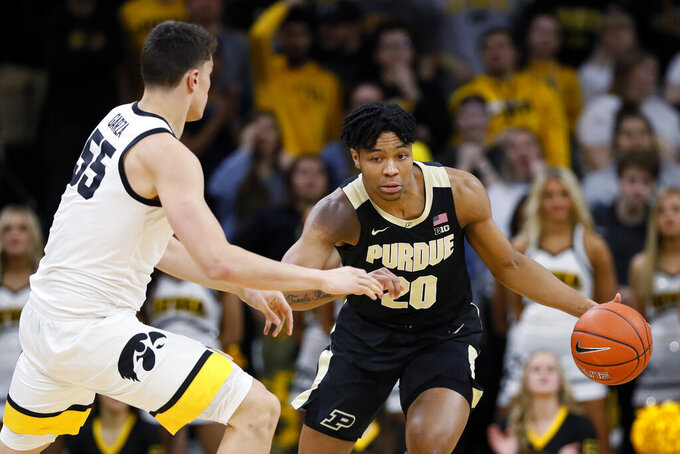 IOWA CITY, Iowa (AP) — Purdue handed No. 18 Iowa its worst loss of the season last month. The Boilermakers used the same plan again in beating the Hawkeyes, 77-68, on Tuesday night.

Their offense wasn’t as powerful, but their defense made the biggest impact.

Garza, the Big Ten’s leading scorer, had 26 points and 12 rebounds, but Wieskamp was held to 10 points and Fredrick had just eight.

That was similar to the first meeting between the two teams, when Purdue defeated Iowa, 104-68. Garza had 26 points and no other Hawkeye scored in double figures.

“When you give that much attention to those guys, some guys are going to be open,” Purdue coach Matt Painter said. “If they make some open shots, we’re going to have to change some things.”

“You could tell tonight they really keyed in on Luka, CJ and I,” Wieskamp said. “There weren’t a lot of opportunities for us tonight.”

Garza had his 15th double-double of the season. It was the 15th consecutive Big Ten game of 20 or more points for Garza, the longest streak by a player in the conference in 20 years.

Eric Hunter Jr., scored a career-high 19 points, and Evan Boudreaux had 14 points and 14 rebounds to lead the Boilermakers.

Purdue had a season-high 19 3-pointers and shot 63.1% from the field in the first game.

This game was won on the inside, with Purdue scoring 30 points in the paint. The Boilermakers also had an 47-33 edge in rebounding, including 21 offensive rebounds.

“They pounded us on the glass,” Garza said.

“When you give up 21 offensive rebounds, we’re going to get beat,” McCaffery said. “It’s that simple.”

Purdue led by as many as 21 points in the first half.

“I don’t think the effort was there,” Garza said. “We had a couple of times (in the second half) where we fought back, but we didn’t fight back to the best of our abilities. We could have made a couple of more runs at it.

“I’m sure it will feel good at some point,” Garza said. “I think it will be something I can look back on and be proud of. But right now it’s not important to me.”

Purdue, which had lost four of its previous five games, kept its postseason hopes alive.

The Hawkeyes suffered a crucial loss chasing a double-bye in next week's Big Ten tournament. Iowa is tied for fifth place, 1 ½ games out of fourth place.

Iowa: The Hawkeyes close the regular season at Illinois on Sunday.