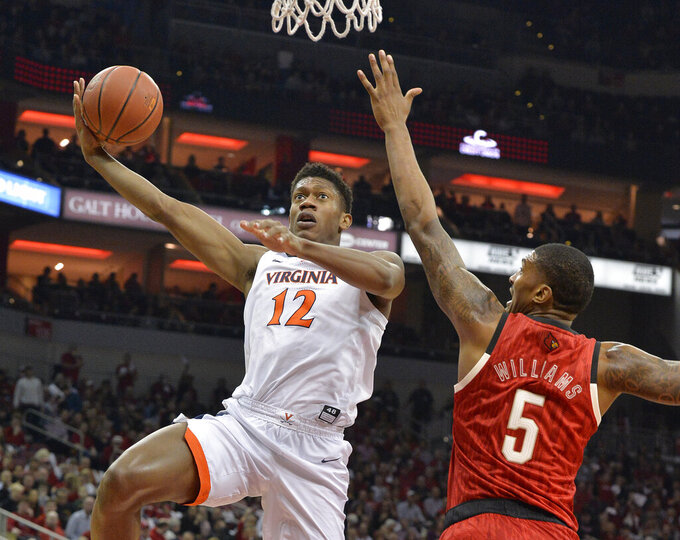 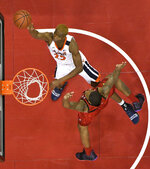 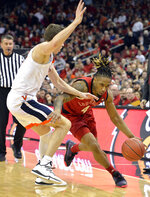 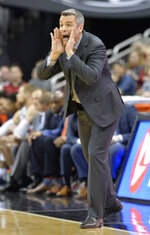 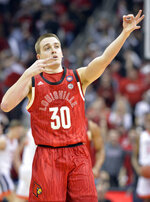 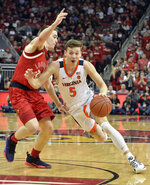 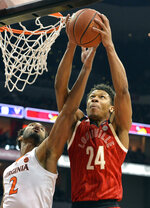 LOUISVILLE, Ky. (AP) — De'Andre Hunter was hungry to do his part.

The hard part was waiting nearly 9 1/2 minutes on the bench with two fouls. Once Hunter returned, he couldn't miss and all was right for No. 3 Virginia on Saturday as it rallied from a double-digit halftime deficit against No. 18 Louisville.

Hunter scored 19 of his career-high 26 points after halftime, and the Cavaliers recovered from a 12-point hole to win 64-52. Virginia won its fourth straight game and kept at least a share of the Atlantic Coast Conference lead. Louisville has lost five of its last seven.

After the break, Hunter made all six shots, including two 3-pointers, to finish 9 of 11 from the field. The sophomore guard also made all five shots from the free throw line and six for the game.

"I was making my shots, so I was feeling good," said Hunter, whose previous best was 23 points. "I just wanted to keep shooting and teammates kept feeding me the ball."

Hunter thrived at Louisville for the second year in a row. His buzzer-beating 3-pointer capped Virginia's five-point rally in the final 5 seconds to win 67-66 last March.

The wait to get back on the court was not easy.

"I just want to be out there so when I get a chance I can be aggressive," he said.

Mamadi Diakite added 14 points for Virginia while Jay Huff came off the bench to score eight of his 12 in the first half.

Louisville made 10 of 16 from behind the arc in the first half before cooling off. The Cardinals were just 2 of 17 the rest of the way.

"We knew they were shooting it really well," Virginia guard Kyle Guy said. "We didn't really sweat it because we knew they weren't going to make it the whole game, and if they did we'd just have to start making shots."

The defeat for the Cardinals came 11 days after they blew a 23-point, second-half lead against No. 2 Duke in a 71-69 loss, and three days after they were shellacked 69-49 at Syracuse .

"(Being) up 10 and you lose is unacceptable," said guard Christen Cunningham, who had nine points. "We've blown leads now in three of the last five games. We go to Syracuse and just got annihilated. We've got to change be more resilient."

Jordan Nwora had 17 points and reserve Ryan McMahon scored 12 for the Cardinals.

Virginia continued its push toward the top of the AP Top 25 . Louisville figures to fall from the poll with its second double-digit loss this week.

Virginia: The Cavaliers improved to 8-2 against ranked opponents and beat Louisville for the eighth consecutive time. Denying the inside was key: Virginia shut out the Cardinals, outscoring them 20-0, in the first half, and 38-4 overall. Patience paid off as the Cardinals shot themselves out of the game. Virginia owned the boards 39-28.

"We are such a post-scoring team," coach Tony Bennett said, "but there are different ways to get it in the paint, whether it be drives or tough finishes. The rebounding and the tough play in the lane, we did some nice things off the ball screen."

Louisville: The Cardinals needed to win for reasons beyond conquering their nemesis. They instead continued their freefall in the standings, and their failure to generate anything inside was a key factor. Especially when their reliance on perimeter shots began to backfire.

Virginia: hosts Georgia Tech on Wednesday in its lone regular-season meeting with the Yellow Jackets.