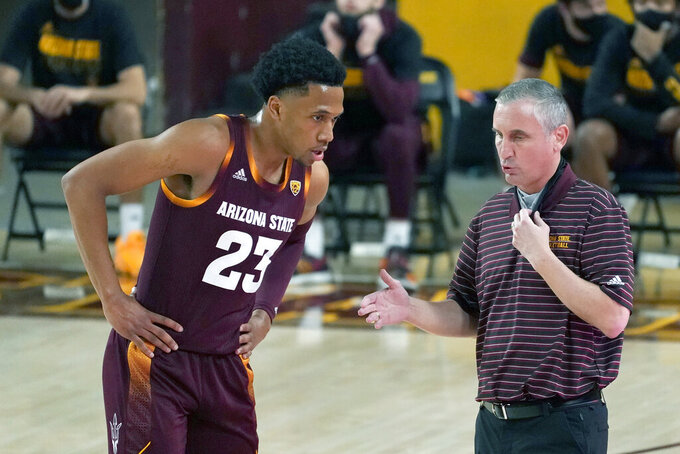 FILE - In this Jan. 21, 2021, file photo, Arizona State coach Bobby Hurley talks to Marcus Bagley during the first half of the team's NCAA college basketball game against Arizona in Tempe, Ariz. Arizona State lacked chemistry and consistency a year ago, causing the Sun Devils to labor through the 2020-21 season. Seeking a change, Hurley overhauled the roster in hopes of getting the Sun Devils back into the NCAA tournament. Bagley opted to return to Arizona State after initially entering the transfer portal. (AP Photo/Rick Scuteri, File)

Hoping to return the program to an upward trajectory, Hurley overhauled the roster for 2021-22, bringing in a group of transfers and freshmen whom he hopes can add a level of grit.

“I think it comes down to that really, mental toughness,” Hurley said. “We had games last year where a team would run 10 points off on us and we would not respond. You’ve got to have guys who are willing to face those types of adversities and be able to have a response and dig themselves out of a hole and get themselves back in the game.”

Arizona State had one of its most talented rosters in program history last season, a mix of steady veterans and top-tier freshmen.

The Sun Devils never seemed to gel, plagued by injuries, COVID-19 breaks and a lack of cohesiveness to finish a disappointing 11-14.

The Sun Devils got a big boost when big man Marcus Bagley opted to return after entering the transfer portal, joining Jalen Graham and Kimani Lawrence in what will be a veteran frontcourt.

Guard Luther Muhammad will provide Arizona State with some of the grit Hurley wants after sitting out last season as a transfer from Ohio State. The group of transfers who are immediately eligible arrive in the desert after having success at smaller schools, led by Toledo's Marreon Jackson, Mid-American Conference player of the year last season.

Big man Enoch Boakye has been dealing with a minor knee issue, but is expected to play a big role for the Sun Devils.

The 6-foot-10 Canadian is a physical, athletic presence who was rated No. 20 overall by the 247Sports composite after reclassifying to the Class of 2021. Hurley likened him to a bigger version of former Arizona State guard Lugentz Dort, a confident player who plays and works hard in practice.

“When you have those things going for you with the physical talent you have with the size and athletic ability, it’s a pretty good package,” Hurley said.

Hurley at times would rave about Muhammad last season, even though the tough-minded guard wasn't eligible to play.

The 6-3 guard started 28 games at Ohio State and pushed the Sun Devils every day in practice as he waited for his turn this season.

“He brings a toughness and an intensity and just rubs off on other guys,” Hurley said.

Arizona State should have a chance to figure a few things out on the court with a nonconference schedule that starts with Portland, UC Riverside and North Florida.

The Sun Devils' first big test will come against San Diego State on Nov. 18. Right after that, they face a tough Battle 4 Atlantis field in the Bahamas that includes No. 8 Baylor, No. 18 Auburn, No. 24 UConn, Michigan State and Virginia Commonwealth.